Cape Horn: Mythical cape for the history of sailing 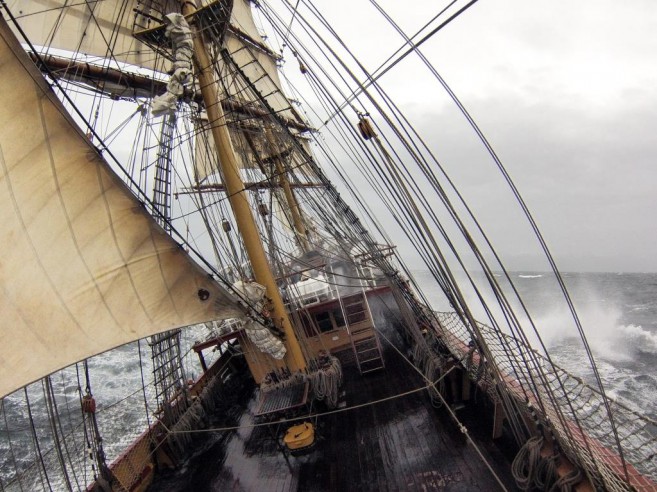 From late last night we could see in the morning twilight our goal destination of the trip. Cape Horn Island showed itself on a dark sky background in a cold and drizzle dawn. The famous lighthouse of the island could be spotted by the lookouts during the dark hours, shinning its light with a period of 12 seconds. Our closest position from the actual Cape Horn was just around 2 miles at 06:00h in the morning, by then we were all on deck to enjoy the views and rejoice ourselves for reaching such mythical cape.

For some of us it has been a 3 months sailing trip from Texel (Holland) all the way here, on the sake of the Schouten and Le Maire voyage of discovery 400 years ago. For others it has been a shorter adventure, depending on the embarkation port, but for all on board now, it has been from the 4th November, departing from Salvador de Bahía. However, reaching Cape Horn is not the end of our adventurous journey, still great difficulties to face, to get safely to the Chilean Patagonia, sailing, if possible, all the way on offshore treacherous waters to 50ºS along the Pacific coast of Chile, reaching Punta Arenas as our last port.

And after passing by the Horn under almost full sail and with the town of Hoorn flag hoisted together with the Sail Training International flag and Dutch Tall Ships flag, all turned out on a new adventure indeed. As we sail Westwards with Northerly-NNE-ly winds, and we start enjoying morning the coffee break, all of a sudden the wind backed 110º in a few seconds. All sails backed wildly and the ship starts rolling heavily, as Klaas runs to the wheel with the shout on his mouth “Bear away!!!” and the 2 bells are rung. From then on all becomes hectic on deck and aloft, with both permanent watches on deck plus the voyage crew watch, as the increasing and gusting Westerly wind, blows us off the Horn. As we advance Southwards the Cape Horn current flowing together with wind towards the East, push us on a SE-ly course into the infamous Drake Passage.

As we get deeper South, the swell increases to 4 to 5 metres and the wind rises, now up to 40 kn and gusting even harder. More sails are furled and we end up with just the Fore top mast staysail, Lower Topsails, Monkey and Spanker set. From then on and for the rest of the day we are “lying to” keeping our bow 60º to the wind, sitting nicely while riding the big swell. We wait for better sailing conditions to try to sail towards the West. In the afternoon we are already 27 nm South of the Horn, and some sails are changed, passing to storm set, as the gusts increase up to 50 knots.

As we can realise now, the unpredictable violence of weather and sea conditions in the Cape Horn area and the Drake Passage made exploration difficult, for example it was only in 1624 that the Horn was discovered to be an island. It is another telling testament to the difficulty of conditions in the area that Antarctica (only 650 kilometres (400 mi) away across the Drake Passage) was discovered only as recently as 1820, despite the passage South of Cape Horn had been used as a major shipping route for 200 years. From the 18th to the early 20th centuries, Cape Horn was a part of the clipper routes which carried much of the world's trade. Sailing ships sailed round the Horn carrying wool, grain, passengers and gold from the west coasts of North & South America and Australia back and forward to Europe.

But in more recent times, and as far as we know, last Tall ship doing the whole crossing of the Horn, westwards, was the P-liner “Priwal” 75 years ago. The same ship that holds the record of 5 days from 50º in the Atlantic to 50º in the Pacific Ocean. Now with The Europa we are trying it again but a record run is out of the question.

Cape Horn is located at 55°58′48″S 067°17′21″W, on Isla Hornos in the Hermite Islands group, at the southern end of the Tierra del Fuegoarchipelago.It marks the north edge of the Drake Passage, the strait between South America and Antarctica. At the time it was discovered, the Horn was believed to be the southernmost point of Tierra del Fuego. The cape lies within what are now Chilean territorial waters, and the Chilean Navy maintains a station on Horn Island, consisting of a residence, utility building, chapel, and lighthouse.

“I am the albatross that waits for you at the end of the Earth. I am the forgotten soul of the dead sailors who crossed Cape Horn from all the seas of the world. But they did not die in the furious waves. Today they fly in my wings to eternity in the last trough of the Antarctic wind." Poem by Sara Vial inscribed on the albatross sculpture at Cape Horn.

It is not correct to say that PRIWALL was the last to cross through 50/50 from the east. I am in touch with members of the crew of REGINA MARIS. She in 1969 rigged as a barquentine made that passage in both directions to satisfy requirements of the AICH Cape Horners St Malo, so that the brothers Wilson could both join as captains. Since that time the Russians have taken both their big four posters SEDOV and KRUZENSHTERN on that rounding but weather they were under sail alone I am as yet still trying to discover. Chris Roche Editor. We will welcome applications from any of the EUROPA crew who made this present voyage and rounding www.capehorners.org

Congratualation to Claas an the complete crew! And many thanks for the impressive Logbook, Jordi! Jutta + Werner, voyage crew 2011 and 2013.