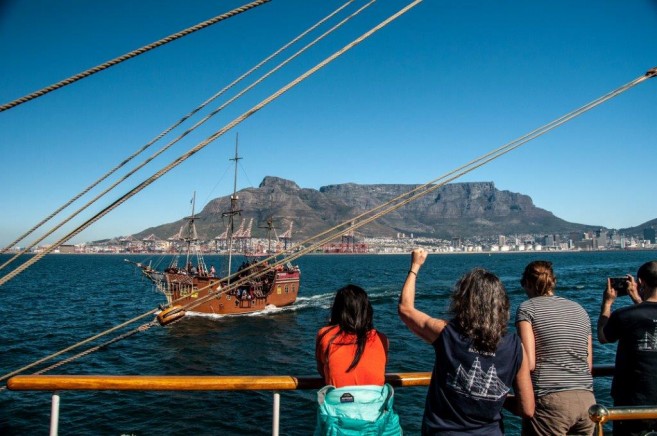 Day at anchor before going alongside

Last afternoon, after having a good look at the Cape Good Hope we turn northwards and slowly head to Cape Town. Clear skies, sunshine and calm seas were with us during the whole journey, leaving behind a starry night. As we make our way along the South African coast, several lighthouses and towns shine their lights in the night. During the night we tried to sail our way, and Europa spent several hours under sail, at speeds between 2 and 3kn, under fair light airs from a SE-ly direction. Sail handling was necessary on few occasions to set and trim canvas trying improve our progress. Nevertheless before dawn the breeze turned to NE-ly, gently blowing on our nose. That made for striking sails and start engine once more.

It is hard to believe that Cape of Good Hope, last couple of days completely calm and sunny, was originally named Stormy Cape by the first European to reach such latitude along the African coast, Bartolomeu Dias in 1488. This Portuguese of noble blood, Knight of the Royal Court and man-of-war Captain sailed on an exploration trip to find a sailing trading route to India, eventually reaching the Southernmost tip of South Africa before having to return. He opened the route for others to come and thus expanding the Portuguese trading and interests on Africa and India.

Nowadays Cape Town and Cape of Good Hope are still part of major trading routes for cargo and tanker vessels, as could see with many off those ships en route in the area. During the night their lights could be seen by the lookouts here and there all spread in the coastal zone, but this morning we found ourselves amidst thick fog, masking the views of Cape Town shores.

Before breakfast all sails are taken down, safety nets and lines stowed away, and the ship readied for arrival. Not long afterwards anchor goes down and we are ready to spend our last day at anchor, as the sky clears up leaving behind a gorgeous sunny day. Ideal to furl sails, wrap up the trip and get ready to visit Cape town tomorrow.

Lunch was served on deck and today diner as well, with a farewell barbecue. Official disembarkation still is on the 23rd, some of us flying straight away, others still with some days off to enjoy Cape Town, but we all can have a full day tomorrow to visit Cape Town.