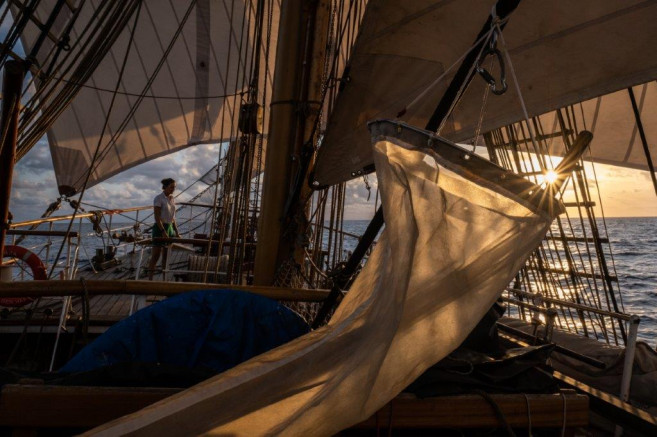 Plankton net for night trawls hangs over the Sloop deck, cleaned and drying after its been put in use before dawn.

Once the samples are collected and placed under scrutiny, decks are clean and ropes tidy up after the trawling, it is time for the mid-watch coffee break. There, Captain comes up with the news that we are about to cross the declination line of the sun. At 3:38h UTC, it lies straight over us… on the opposite side of the planet.

As we are crossing the Atlantic Ocean and the Equator on our way to Montevideo, both we and the Sun are on a journey south. Each day as our latitude south increases we catch up with the declination of the Sun. Once we pass this point, the Sun will no longer pass south of us but north of us at noon. Therefore a contest was set by the captain between the Voyage Crew on who could determine the date and time on which we would catch up with the Sun. This of cause is also determined by the speed of the vessel which then again is determined by the weather at sea.

Everyone on board spend hours in the library, studying celestial navigation and looked through the tables of the Almanac and at the last day of the competition everyone wrote down their answer the one who got closest to the time and date would win the contest. On the 24th of October 2021 at 03.38 UTC at Lat. 12°17’ S Long. 33°21’ W we passed the Sun’s declination.

With the sun now lying on the North, 2813nm of Atlantic Ocean are behind us, 1800nm are left to arrive to Montevideo. Good weather for the moment, and time enough to continue with the several maintenance projects ongoing on board. Some of them necessarily have to be finished while the temperature and climate are benign before Europa’s next trip heading to the frigid Antarctic waters and the rough seas of the 40º, 50º and 60º South. Scraping, sanding, oiling, varnishing amongst them.

Other tasks can be always on the go, like the art of making straight grommets. Easier said than done… time and again unwanted twists appear whenever one thinks the job is done, loose lay on the rope strands increase the difficulty… Once the perfect rope ring is mastered, here comes to moment of truth to wrap it around a newly overhauled and six layers varnished block, just to realise that there will be not enough space for a damn seizing, or on the contrary, even two blocks could fit on your highly oversized grommet. Frustrated faces thinking how the hell that happened and hands on knife cut new rope to start the job from scratch. Now and then a triumphant smile… got it right.

Stropped block is ready to be presented to Bosun and under her approval, can be rigged wherever necessary. She can be found a bit everywhere, from the highest mast aloft to the ship’s dungeons; but last couple of days, her favoured occupation involved a full reconditioning of the air valves in our black rubber inflatable boat. Intricate mechanism to take apart, clean and grease.

In the meantime there’s countless other items to take care of.

With all that in the pocket and the necessary sailhandling, now and then adjusting braces a bit back and forth to the slightly variable winds, 145nm have been sailed during the last day. Using all the Europa canvas we find ourselves 285nm West of Salvador de Bahia city in the Brazilian coast.

Quite steady E-ly fair breeze had made for a good steering on a 202º course, but after dinner things started to change a bit, with wind shifting veering to more SE-ly. Braces are pulled sharper, and sailing close-hauled it is at about midnight when sudden wind shifts and rapidly developing showers made for the Captain to take precautions and reduce sail, preparing the ship for stronger winds and “Squall mode”: Upper Staysails are doused together with Skysails and Flying Jib, all furled just before midnight.