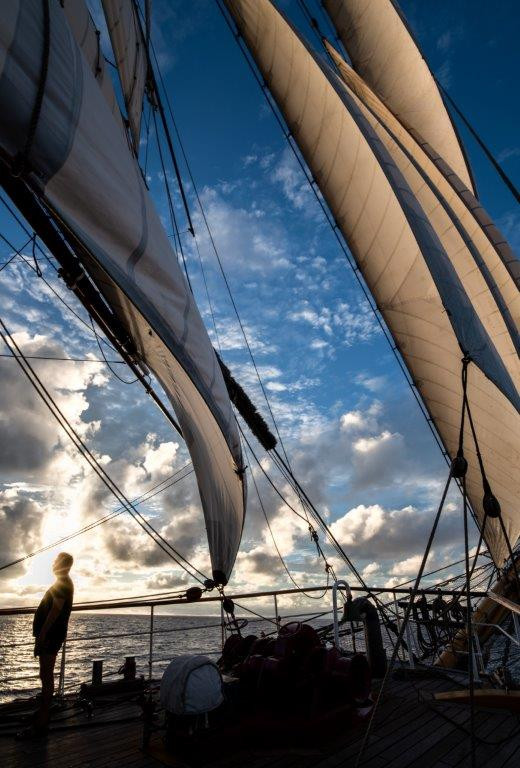 Overnight the Europa sails in the light breeze while we get closer to the calm airs in the doldrums, a couple of degrees of latitude southwards.

With the wind becoming more E-ly, the steering is first a bit to the South, then back again to a the S by E course. Braced sharp on Port tack, configuration that probably we will keep for the following days.
For the moment, sailing Close Hauled there is no need to have all the Studding sail gear hanging and their booms out. So, during the morning-watch they were pulled in, sheets taken down, and halyards kept aloft, bowlines to their blocks.

Closing up to more Equatorial latitudes, Europa sails in a drier area, with the moist in the air seemingly accumulating on picturesque cumulonimbus, now accompanying the higher clouds. Their combination makes for beautiful sunrises and sunsets in comparison with the duller coloured skies we had more Northerly in the tropics.

The beauty of the skies cannot make us forget that typically, this area is characterised as well by its light and erratic winds. And indeed, during the last couple of days, it seems to become regular the combination of good sailing hours with motor-sailing bits.
Though we are lucky enough to still have good breeze now and then, instead of falling already into windless oceanic zones. Light winds come and go, blowing from the northerly and northeasterly quadrant as a reaction the Easterly Wave coming from the African coasts and catching up with us.

As we can see, after sailing a total of 1370nm from the start of the trip in Canary Islands, weather and oceanic conditions alike start to change. As we sail, we start to feel a southeasterly long swell that adds a bit of pitching to the gentle rolling we have been experiencing.
At the same time the oceanographic surface currents start turning, running Eastwards. We find ourselves entering the area of the Equatorial Countercurrent.

Both North and South of the Equator, in all three oceans we find a Westwards water flow. But these currents are separated at the Equator by an Eastwards stream: the Equatorial Countercurrent.
This derives from the accumulation of warm and less dense waters at the western Pacific shores, producing a slope on the oceanic surface resulting in a gravity flow to regain stability.

Driven by those currents, floating rafts of Sargassum start to appear on the water surface. Despite the increasing amount of it we can see all around, we are not sailing in the area of major concentration of this free floating algae. Different species of it are distributed throughout temperate and tropical waters. The widest free floating patches of Sargassum are known since long time ago, and there are many references to the so called Sargasso Sea in the literature, but its distribution lays still far from us. Even so, some of it seems to escape the main concentrations and spread over larger area of the Atlantic. The interface between Trade Winds and Doldrums seem to be a limiting factor on their distribution.

Those seaweed meadows show great persistency, probably already present and found by 1452 when captain Pedro Belasco, born in Spain, discovered the island of Flores sailing off the Azores. And sure afterwards Columbus crossed those great floating algae accumulations in 1492.

Mar de Sargasso, refers to two fucus banks. The largest one laying between 19º and 34º of latitude, about a meridian 7 degrees west of the Azores. The smaller one situated between Bermudan and Bahamian islands. Both groups of seaweed taken together with the transversal strip joining them, go under the name of Sargasos Sea, covering a surface area that is between six and seven times the area of Germany.
Thus does the oceans vegetation offer the curious example of social plants of one particular variety.

Besides the beauty and the welcomed change on the appearance of water surface that those algae rafts offer, their ecological role is of the utmost importance on the open tropical and subtropical oceanic marine ecosystems in the North Atlantic.
Amidst their fronds live a large amount of sea creatures, offering nourishment, a floating shelter and a base where to lay their eggs. Becoming like that an umbrella under which large biodiversity flourish.

A host of small marine animals inhabits these gently-moved and evergreen masses of Fucus nations, one of the most generally distributed of the social plants at sea.