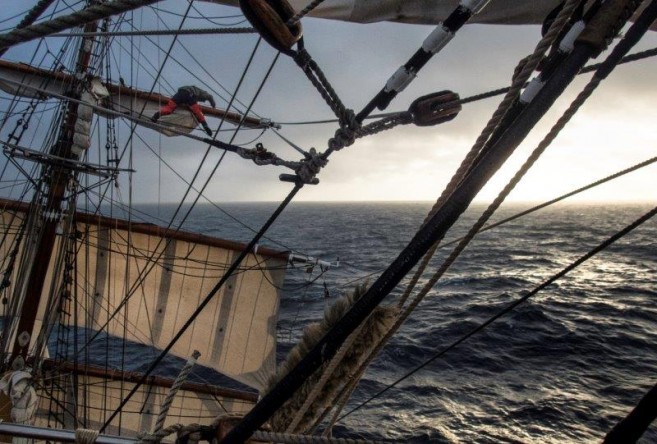 With the fair winds pushing us fast towards South Georgia, and despite the uncomfortable rolling as we sail over relative big swells, it really seems that our arrival time will be earlier than scheduled. That will allow us to probably spend a bit more time on the fantastic island.

During last night the wind decreased a bit, blowing at around 25kn. We are sailing between broad and beam reach, allowing us to set a bit more canvas. Inner jib and fore topmast staysail are up during all night, together with the spanker. For the rest, the configuration is still the same, squares up to upper topsails and lower staysails. Like this we reach speeds up to 9-10kn. Making great progress towards South Georgia. In the morning the weather is drier, at least it does not rain, but we still need to dress in our good waterproof sailing clothes as the decks receive the sea spray and are still washed from time to time by big waves.

And while the sun rises, while sailing at 7.5kn on a 040º course it looks like we pass through a fish swarm as Hourglass dolphins plus a couple of Humpback and several Fin whales seem busy feeding around us. Also we have a nice sight of a Pilot whale pod joining the feast. The species of Pilot whale that inhabits these high latitudes is the so called Long-finned. Its relative, the Short-finned Pilot Whale occupies areas at lower latitudes and warmer waters. Their dark body colour, several white marks like an eye stripe and dorsal saddle, their broad backswept dorsal fin and their bulbous head make them unmistakable. All the mixed group of different species don’t show much interest in the Europa and just mind their business as we sail by.