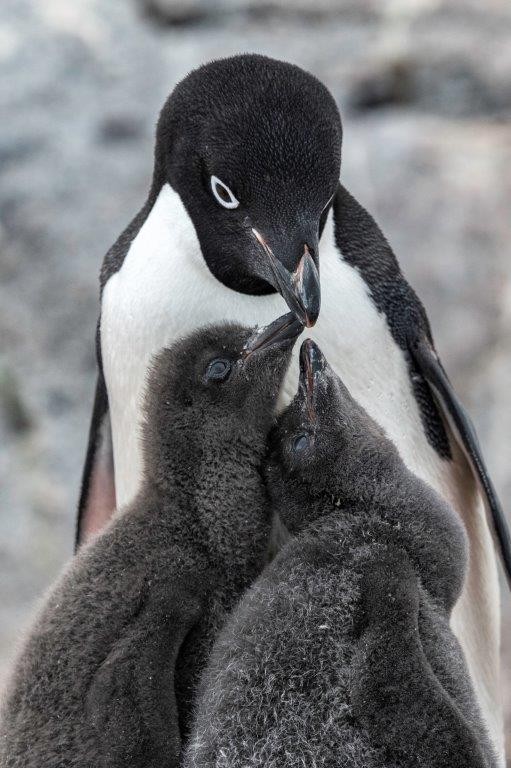 From the very early hours of the day we were slowly motoring towards Yalour Islands, still through heavy ice conditions covering the calm seas. The small archipelago where we were heading are a group of islands and rocks 1.5nm in extent, laying 1nm northwest of Cape Tuxen. Motoring in the surroundings of the Collins Bay was a jaw dropping experience. The landscape did not disappoint as we passed through. With a dramatic rock skyline tipped off by white ice caps it kept everyone in awe of its beauty. Enjoying the ride we arrived close enough to the Yalour Islands to do a scout at about 08.00h. Guides went ashore and assessed the chances for doing a landing. Soon after they inform that it was actually going to happen. Voyage crew got ready for another day of glorious weather, penguin spotting and walking in the snow, often up to our knees. It was about 0°C this morning with a sea water temperature of
-0.6°C. We spent about 2.5 hours on the island with the group following Jordi as he opens a path passing the penguin rookeries and to an overlook out over the bay. It was a spectacular morning and while some people were happy to just sit and observe the Adélie penguins others took a bit of a walk along the crest of the hill to take in the mountainous surroundings of Antarctica. Everyone got back to the ship in time for lunch and some of us enjoyed our daily dose of soup out on deck while the ship covered the 10nm to our next destination. After lunch there was the 3 bells which everyone now knows means Jordi was going to give us an update of the afternoon plans. It was going to be a zodiac cruise through some icebergs. We split the group into two sittings and the first cruise got going at about 14.30. We spent about 2 hours out between the ice. It was quite difficult to get through some of it and the two zodiacs and Sloopy struggled a little but it was worth it as we got up close and personal with the icebergs. We were able to boat up alongside some of them and even had the opportunity to pick of some fresh water icicles and enjoy an ice lolly while out boating through the icebergs. The sheer size and beauty of the icebergs and natures artwork never fails to impress. After Nilla’s talk the evening before we were now all ice experts and everyone had their facts and figures on board as we glided (and sometimes rammed) through the ice. The shapes, colours and appearance of the icebergs were incredible as each and every one of them was unique. We got back to the
Europa about 16.30 and the second group was ready and waiting for their turn through nature’s path of ice. We set off again and had a similar iceberg expedition. The start of the cruise was fairly easy to maneuver and again we were treated to the beauty of the icebergs. We stayed out in the ice for about an hour soaking up the magnificence and then we got back to the ship. At least we gave it a good try to get back but it was not so easy. Then we got Dan on the radio to us and we could see him aloft the main mast scouting the area from above for us. With some ferocious driving, instructions from Dan and ship maneuvering from Merle we eventually got a way through the ice and were back on board just in time for dinner. Everyone was relieved and thrilled at our exciting afternoon. The evening saw us sail through The Lemaire Channel, this time heading north, and as last time it impressed again. The water was calm and still with not a visible ripple. The reflections of the mountains glistened in the water under the rays of the beautiful setting sun in the east. The temperatures had dropped to -1° but with people wrapped up many were out to enjoy the sunset. But not all was over for the day, as we keep going until around midnight, to reach the good anchorage of the Hidden Bay in Port Lockroy, the area where we plan tomorrow’s activities.