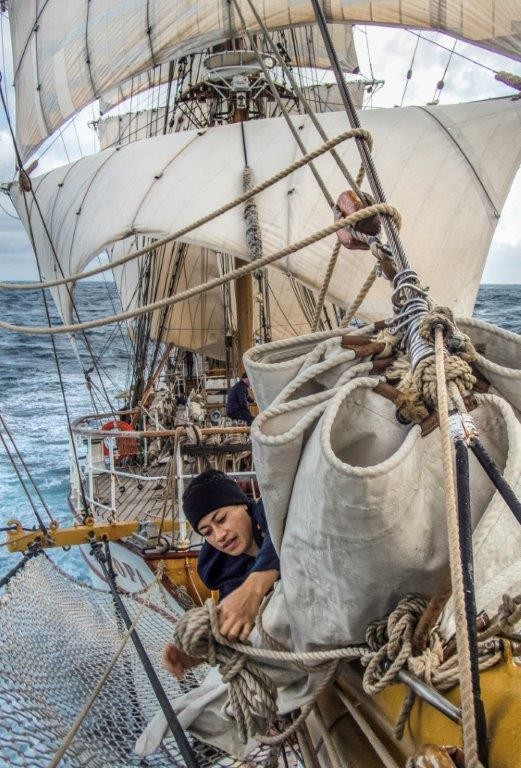 Last evening on increasing winds and raising seas once more, the watches keep on standby to clue up Royals when necessary. But so far Europa carries all she can handle on that dead downwind run situation, until midnight when the weather finally made for the Royals to be clued up and furled with the help of both permanent crew watches. Since then Europa keep riding the swell on a 60º course at between 10 to 11kn of speed, with her canvas spread to the over 30kn blows from the West.

We are welcomed to the new day with drizzle and overcast skies, but nothing seems to change the feeling Europa seems to have, like a worked out horse smelling the stable after a journey of hard work, giving all she has to bring us soon and safe to Cape Town. A little help is given to her at daybreak when on slightly decreasing winds the Royals are set again. From sunrise onwards, the clouds open now and then, and during the day sunny spells break the overcast skies.

For the next hours the W-ly wind keep blowing hard up to 30kn, as our course starts bringing us in a more Northerly direction. Steering about 30º, some sail configuration changes must be made. From a downwind dead run, with the yards squared, we brace to Port tack between Broad and Beam Reach. Sailing on that new direction also meant that some of the Staysails could do their job, like this Aap and Dekzbabber go first, and then, in decreasing winds to 20kn, larger Desmond replaced Aap and Fore Top Mast Staysail is  also set. In that way we can keep a good speeds of between 9 to 10kn, thanks to the help of favourable Northbound current, probably part of a detached Agulhas current eddy, now swirling with its warm waters into the South Atlantic close to the African continent. Actually the water temperature has increased up to about 21ºC at noon, a sudden rise of 4ºC in four hours, indicating a boundary between those different water masses.

During the last 24h the weather and sea conditions were good enough to sail a good 204nm, counted from noon too noon. At that time, just 236nm were left to our arrival to Cape Town. It is already 194 hours ago that we heaved anchor from Tristan da Cunha and set sail. Since then 1426nm are at our back, sailing at an average speed of 7.4kn. Luckily our route brought us over fair winds areas, first under the influence of a High Pressure system for several days, then catching the windy corridor between this High and the Lows running southwards along the Roaring Forties. And now again, as we turn northwards, we get closer to High Pressure centres next to the South African coast.

The South African Continental shelf is not far ahead of us, and the depths of the waters we are sailing started to decrease in the evening and during the night. From the abyssal depths of over 4000m, just broken here and there by steep seamounts, the sea bottom started to rise indicating that we start sailing over the continental margin, the zone of ocean floor that separates the oceanic crust from the thick continents. This transition occurs over the continental rise, that leads to the steeper Slope and finally to the flatter and shallower Shelf.

The afternoon brought easing winds, just with the occasional little shower passing by. With a general forecast showing a decrease in the wind more canvas is set. Middle Staysails come up together with the Gaff Topsail, and later on the rest of the remaining canvas is added. The night is spent under less than 15kn of WSW winds, steering now on a 015º and braced for Broad Reach sailing. Europa stills achieves  6 to 7kn of speed over calmer waters than earlier on, but also helped by northbound strong current.