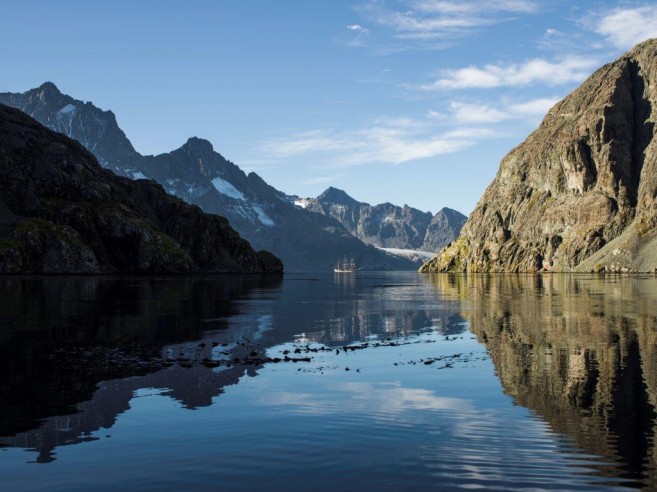 After arrival in the evening to Cooper Bay, close to the southern end of South Georgia, we drop anchor and prepare for the next forecasted windy hours. The location, partially enclosed and sheltered by Cooper Island, helped to spend the night without much trouble.

The southern part of the island offers a much more interesting mélange of geological features than the more uniform Cretaceous of the so called Cumberland Bay and Sandebugten Formations that forms practically the rest of South Georgia. Here, we are on a highly metamorphic area, showing different scale folded layering on the rocks, but also it is a meeting point for the ancient Drygalski Fjord Formation and some Granitic rocks. All disclosed in great views from deck under the blue morning skies. By then all was ready to try a landfall, but still the sea conditions and the 20 to 30kn of gusting winds made for a delay on the operations. Luckily we haven’t got to wait too much, just in an hour after breakfast the conditions eased, and under sunny weather we all board the zodiacs to do the last scheduled landing of our trip. The only approved landingsite of the area is a truly South Georgia little corner, where in not a large area a bit of steep terrain and thick tussock grass must be dealt with, to approach the main character of the spot: a large Macaroni penguin rookery. Aside them, spectacular scenery surrounds us, with jagged mountains and at the background, icebergs floating at sea just in front of what looks like a thick fog and low-cloud bank hoovering over the open ocean.

From the small landing spot we climbed up a slippery and muddy terrain to a raised beach. Here the rounded cobbles and pebbles are witness of a past when the waters reached this high. The cove is nested between rocky outcrops occupied by the ever-present Fur seals, a couple of young Elephant seals and a few Pipits looking for nourishment amongst the stranded kelp. Around us the grass and tussock-covered slopes rise steeply up the hills. And as we have seen before, this habitat is a preferred place for Fur seals, that lay upon the tussocks, easily destroying them and greatly changing the ecosystem. Here, the numerous burrowing petrels plus the countless Macaroni penguins, depend upon this tussocks for nesting.

With difficulty we make our way through the slippery, muddy and high tussock trying to approach the penguin colony. Suddenly, there they were, everywhere amongst the grass. We have reached the rookery of those elegant penguins which name comes from the ‘macaroni’ or ‘yankee doodle’ feather that was in the hats of stylish young Italian men during the 1920’s.

At this time of the year the area is filled up with adults molting, and several Skuas and Giant petrels take advantage of this phase. Some of them become weak if they didn’t accumulate enough energy to spend days ashore not eating, just staying put and using their reserves on growing their new coat.

Soon it was time to re-trace our steps back to the landing beach, after this adventurous yet amazing landing, on a great spot where to say farewell to out South Georgia walks. All spiced-up with a Macaroni penguin rookery, superb landscape and battling tussock grass fields.

But not all was over yet on our visit to South Georgia, in the afternoon there was still time for another activity. Europa heaves anchor and make her way a handful of miles southwards towards the entrance of the large Drygalski Fjord, and its smaller and narrower side inlet Larsen Harbor.

The larger feature is named after Erich von Drygalski, who lead the German South Polar Expedition (1901-1903) with a crew of 32 men on board the Gaus, which had been builtspecifically for this endeavour. They set sail for Antarctica from Cape Town and ended up discovering new Antarctic lands located at the complete opposite side of Antarctica that we have been visiting. They named it Kaiser Wilhelm II Land. The Gauss became trapped in the ice around 40 miles from it, but the crew was ready for an overwintering. The scientific work, main goal of the expedition, kept on going mostly on the fields of cartography, meteorology and oceanography. During this research they were the first ones to present some evidence of the existence of the Polar Front, later confirmed and studied by another German expedition lead by Filchner.

With the Europa drifting between Drygalski and Larsen fjords, Sloopy and both zodiacs took us to cruise along the shores of the latter one.

Larsen is a narrow, steep sided valley shaped like a little hook and crowned by a small glacier front, that in the past carved the fjord but nowadays have retreated far back into the valley.

Again, the geology here makes it even more attractive. We cruise under 1000m rocky cliffs, belonging to Larsen lava Formations, dating from the Jurasic. All cut up and criss-crossed by Basalt dikes. The dark compact rock is probably mid-ocean-floor material representing upper mantle materials.

But not just the configuration of the landscape brought us here, also its unique wildlife. Amongst the cliffs, many South Georgia shags nest together with countless Antarctic terns and Kelp gulls. Pipits and Pintails thrive along the coast. But without doubt the highlight of Larsen Harbour is the population of Weddell Seals that occupy the small beaches throughout the length of the fjord. This bay is home for the northernmost breeding group of Weddells, as it is mostly an Antarctic species. We haven’t seen them so far during our trip, so here was our chance. And between the high cliffs, glacier front and waterfalls, there they were, a handful of them scattered along the fjord, snoozing on the rocky shores.

It was midafternoon when everybody was back on board, with the Europa gently drifting on the still waters of Drygalski fjord entrance. At the background of the ship Drygalsky shows its primeval basement rocks, fragment of the ancient Gondwana Continent. The fjord represents a major fault zone and different rock formations and ages can be seen at its northern and southern shores, right where Europa lays getting ready for the immediate upcoming Southern and South Atlantic Ocean crossing of 1444nm, to the planned stopover at Tristan da Cunha.

Soon we start motoring our way off the bays and fjords, looking for some offshore winds to set sail. Behind us we see how the Southernmost tip of South Georgia start disappearing in the distance with the last bit of light of the day and the almost full moon rising over the horizon. Called Cape Disappointment, the southern extremity of the island is where Captain Cook realized, to his disappointment, that South Georgia is an island, disconnected from the, by then, undiscovered but coveted Southern Continent.

But certainly, the landscape and wildlife of this area that we visited during our last day at South Georgia, is not to disappoint, with its deep carved valleys and fjords sculpted by glaciers that left behind pointy mountains and sharp ridges. And where a complete array of the island’s wildlife found its home.

What a descriptive, evocative and joyful picture of this impactful last day on the island! And having just read the sailing entries of the 1st one-third of the voyage to Tristan da Cunha, what a contrast in activities! The Bark Europa is certainly unique in the world for providing this range of experiences in one trip!