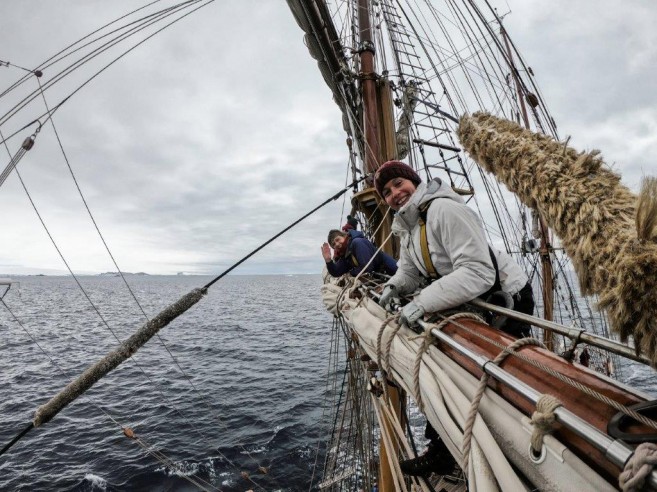 Leaving Deception Island straight after our evening landing at Whalers Bay, Europa face the 120nm open waters of the Bransfield Strait. For a few hours, the forecasted E-ly winds for the next day, seem to have cached up and already blow over the strait, slowing our progress on a W-ly course. The plan for today is to finish the crossing of this body of water and get into the Antarctic Sound. Many hours are required for this navigation and our guides were not sure if we could actually do any activity ashore during the day, but as could see, late in the afternoon we had accomplished the sailing and we were already close to the Antarctic Peninsula shores. The Bransfield Strait is in average 80nm wide and it extends for about 200nm in an ENE-WSW direction, separating the South Shetlands from
Trinity Peninsula and the Joinville Island group, off the N tip of the Antarctic Peninsula. It is named after the Captain Edward Bransfield, historical figure that played an important role on the official
discovery and charting of the South Shetlands and the Antarctic Continent. Already in 1819, the archipelago of South Shetland had been spotted by the English merchant Captain William Smith. His discovery had to be confirmed by the English Navy Admiralty, which sent Bransfield together with Smith once more to chart the unknown lands in the South and take possession of them for England. Their mission was accomplished with great success, finding more of the South Shetland Islands and reporting a new sight. On the clear day of January 30th, 1820, they could see the mountains of the Antarctic Peninsula from the distance. By that time none of them were aware of the great importance of this observation. But they just have discovered the elusive Antarctic Continent. Between them being in the South Shetland Islands and mainland, Edward Bransfield thought that the waters separating them were just a Gulf. About the same time, in July 1819 the Russian Captain Bellingshausen
departed Kronstadt with two ships: the Vostok and the Mirnyi. They made a first stop at South Georgia and afterwards, following the Scotia Arch group of islands, set sail to the archipelago of the South Sandwich before heading to the unknown South. On the 27th January 1820 they spotted land, meaning that their sight their sight was actually three days earlier than Edward Bransfield. Leaving controversial stories behind, the Europa deals during almost the whole day with the open waters of the Bransfield Strait, speeding up as the day advances on lighter winds. With not much time to spare,
nevertheless during the morning we could slow down when a pod of Humpback whales, numbering about 10 to 12 of them, seem to be feeding right on our way. Our Mate Finn idle our engines and slowly drifts the ship while the whales, seemingly oblivious to our presence, keep on their sub-surface feeding business, often showing their flukes when they start their shallow dives, surfacing together moments later. They are now about to end their feeding season here in Antarctica and soon starting their migration northwards to the tropical and subtropical waters of the Pacific coasts of South America. A spectacular sight at midmorning, spiced with the numerous large icebergs that start peppering our way. They will be our companions and sure for the rest of the days we plan to spend in the spectacular Antarctic area of the Weddell Sea, and will represent countless sleepless hours for our Captain and Mates, while steering our way through. Also for almost the whole length of the Bransfield Strait, flocks of Cape petrels fly around the ship, following our wake and waiting for nourishment that we bring to the surface as our propellers remove the waters and our hull cuts through the waves.
With a good couple of hours to enjoy on deck after lunch, the crew propose to do an advanced climbing instruction. With it we lean how to step from the shrouds to the yards and basic techniques to furl the square sails, useful if we plan to go aloft and give a hand to the permanent crew. By the afternoon, almost leaving the Bransfield Strait behind we are slowly coming closer to an area where many place names refer to a Swedish expedition that took place over a century ago. To reach the Weddell sea we will go through the Antarctic Sound, and as this might seem to refer to the continent itself, it is actually named after the ship of this famous expedition. Not only is it famous for being the basis for the theory of continental drift as described by Wegner, it is just as famous for the events that followed the loss of the vessel and the saga of survival the expedition members went through. Close to the entrance of the renown Antarctic Sound, that actually separates Joinville Island Group from the tip of the Antarctic trinity Peninsula, lays a place that our guides have been keeping an eye on since long time ago. For different circumstances, related with timings of the trips, bad weather, swell and drifting ice, they never have been able to set foot on it, but today it looked like the odds where on our side. Despite our relative late arrival, as soon as our Captain Janke manoeuvres the Europa to the proximities of the rocky shores at the North easterly-most tip of mainland Antarctica, a scout zodiac is launched to check the place. Its name is Cape Dubouzet and is off the regular routes and landingsites for passenger ships. A truly exploration afternoon for all, guides, voyage crew, permanent crew and the ship herself. Deep waters rising steeply to the rocky shores, strong currents, drifting ice around the ship at a speed of above 2kn, all made for a hard job from Captain Janke to keep the ship in position, while we all embark the zodiacs to try to land at the swell battered shores of
Cape Dubouzet.

But before venturing deeper into the Weddell Sea, a couple of the afternoon’s hours still were at our disposal to set foot in mainland Antarctica, which we all did after an adventurous landing on the long
surging waves of the steep boulder beach of Cape Dubozet. Great excitement hoovers in the air over the heads of our guides, making reality one of their long term sought dreams of going ashore here. On land, spectacular as it was to get in and out of our boats in the most proper way, or the most efficient, if not elegant manner, everybody could manage a swift zodiac operation, where the boats had to be turned stern to shore for a safe landing procedure. Walking around the desolate Cape we all feel privileged to leave our footsteps on that seldom visited Antarctic coast. Furthermore, that is
the Northernmost point of the continent itself, and we share our time ashore with numerous Gentoo penguins, a small breeding group of cormorants, a handful of pretty looking Weddell seals and several Fur seals, all of them not so used to see people wandering around their domains. Some walked up the rocky moraines surrounded by glaciated slopes to nice viewpoints over the whole area. Others preferred to spend time close to the beach and the breaking waves, but all greatly enjoyed this unique chance to land here. In the meantime, Europa drifted a few cables away from the seashore, looking for more open waters away from the shallows and the ice drifting along the coast. Still braving strong currents against, she approached again when we were all ready to return aboard.
From then on, just a handful of miles were left until reaching Hope Bay, where we plan to spend the night. There Europa arrives before nighttime and drops anchor amidst open drift ice. If the ice conditions and wind allow, that will be our first relatively quiet night on a steady ship since departing from Ushuaia. In front of us the orange buildings of the Argentinean Station “Esperanza”, where this country maintains all year-round presence, and where between 50 to 60 people live for the whole year, including Navy and Army personnel, Officers and some of their families. After mail and radio contacts with them, our guides had made good arrangements for a visit tomorrow.