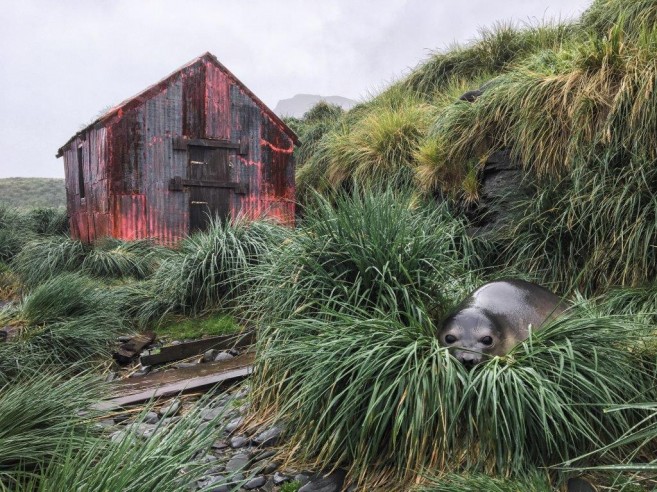 Jason Harbour, where the Europa never have been before, proved to be a safe anchorage for the night. Calm weather was with us overnight while offshore the forecast showed winds up to 40kn. Last evening, after finishing the visit to Grytviken, we just had to trace back a few miles to the west to find this great spot, protected from the deep Low-Pressure system passing over our heads.

During the dark hours the barometer kept gradually dropping but it was during the morning when it dipped 12hPa in about three hours. Actually during the day it went down to 962hPa, a really Low-Pressure that almost reached the bottom of our Barograph.

Anyway, the swell and wind conditions looked good for a morning landing, despite the continuous pouring rain. After a good first scout by our guides, when they choose an itinerary and landing group management, we were all already dressed on our best foul weather gear to go ashore. There, a beautiful beach and grassland festooned with small hills awaited for us to discover. That is the very same place charted by the recurrent name on South Georgia and Antarctic exploration, Carl Anton Larsen. Already in 1894, sailing on board the Jason he charted the bay on a joint expedition with the ship Herta to survey the northern coastline of South Georgia. Just a couple of years before he commanded the same ship that gives name to this site during the “Larsen Whaling Expedition”. By then a major effort was put in Antarctica to determine the viability of establishing a regular whale hunt in the Southern Ocean. Besides his own one, two more expeditions were set for this purpose on a combined job, the “Dundee Whaling Expedition (1892-93)” and the “Bull Expedition (1893-95)”. Antarctica, South Georgia, the explorers and their ships were part of a small world and the same names keep coming back along the history, for instance Bull’s expedition sailed to the Ross Sea on the Antarctic, same ship, now under Larsen command, that Nordenskjold used in the Swedish Ant expedition 1901-1903 to the Weddell Sea. The shipwreck of the Antarctic in the vicinity of the Northeastern tip of the Antarctic peninsula, gave the name to the Antarctic Sound, the wide waterway where we got a few adventurous days earlier on our trip while visiting Antarctica.

In 1909 Larsen was granted a 15 years lease of Jason Harbour. Instead of starting whaling operations here he chose to wait 5 more years to establish Grytviken whaling station. But a hut was built in Jason Harbour in 1911, used for mail deliveries to and from different whaling stations, and still stands here offering a nice visit. And there is where we started our landing. The refuge offers a sparse shelter from the inclement weather, but it looks pretty comfortable fitted with a couple of bunks, a chimney and a table that has become a Museum piece on itself. Nowadays a visitor’s book can be signed by the few people that lands here, but in the past the wooden table had fulfilled this purpose when visitors left notice of their stopover caving their ship’s name or their own. A close examination reveals the oldest carving, dating from 1925. An unexpected diversity of wildlife fills the spectacular scenery all around. Here, Fur seals have found a great place for breeding since the year 2000, and nowadays are virtually scattered around in every corner of the area. A small King penguin colony delight many of us, elegantly standing amongst the tussock grass and green meadows that are filled up with deep pools (Elephant seal wallows), as an evidence of their large numbers that use the area for breeding and moulting. Now just a handful of young individuals could be seen. Pipits and huge flocks of Pintails have Jason Harbour as their home now, a living proof of the rat eradication success, as the presence of rodents was having a devastating effect specially on their populations. Gaining a bit of height over the coastal plane, the beauty of the scenery unfolds regardless the torrential rain. Clouds hang high enough to reveal the steep cliffs and countless waterfalls of the mountains surrounding the site and a large lagoon at the back side of the headland where we landed.

Soaking wet but happy, we board the zodiacs back to the ship, where soon lunch was served, before heaving anchors and set course towards Cumberland Bay East, opposite to Grytviken.

The improving weather may have tricked us to think that the deep cyclonic system affecting the island maybe had passed without leaving behind the forecasted strong winds, but a closer look at the barometer and the weather models reveals that we are actually very close to the eye or centre of the Depression, an area always calmer and with clearer skies than the immediate neighbourhood.

Slowly the Pressure started to raise, and with that soon sure will come the expected increase on the wind and change on direction to S-ly or SW-ly. Time to seek for a better anchorage than Jason Harbour, more sheltered from those expected conditions. Cumberland East Bay looked like a good candidate. As Europa steers off Jason bay the situation is still quiet over relatively calm seas, but things change when reaching the opener waters around the tip of the headland that separates West and East Cumberland bay. Arriving at the so-called Sappho Point and turning into Cumberland East, huge swell hit us, making us heavily roll and catching many of us unprepared for such a sudden change on the sea state. Suddenly any kinds of not sea fastened items fall over from everywhere, on deck and inside the ship, and for a short period even seasickness strike again over some.

Getting closer to our new anchorage, deeper into the bay, the swell decreases and we feel a less uncomfortable rolling as it also comes from our back. Weather good enough to gather on deck for a talk about Kelp. We have been seeing and driving the zodiacs through the canopy of those underwater forests since we arrived at South Georgia, not paying much attention to what was floating, getting tangled on our outboard engines propellers or covering the anchors every time we hoisted them. The huge algae responsible of all this is the species Macrocystis pyrifera, and in fact is of the utmost importance for the coastal ecosystems of the temperate and relatively shoreline cold regions. Today’s talk was centred on the biology, structure of the plant, its great ecological importance and its peculiar reproductive cycle. We could even have a hands-on session over a specimen collected from the beach and immediately released after our discussion about it. We all have been threaten with the continuation of the lecture on a “kelp 2” session, coming up soon.

Right afterwards we were already arriving to the anchorage at Greene Peninsula- Darthmouth Point, quite a spectacular site with a magnificent mountainous landscape trying to show up from behind the low clouds. Expecting the forecasted strong winds to come, we drop both of our anchors, with 5 shackles of chain each, just when the calving front of the large Nordenskjold glacier becomes visible at our Portside. Big rolling breaking swell runs over Moraine Fjord just ahead of us. At its head the high Mount Sugartop 2323m frames the smaller Hanberg and Haker glaciers. At the background of our anchorage, the most spectacular views of the highest peaks of the island slowly reveal amongst the clouds. Mount Paget, with its 2915m height reigns over the scenery towering amidst all mountains and glaciated fjords of South Georgia. As its neighbours Paget has the sister peaks of Mt Roots 2281m and Nordenskjold 2355m. From their white tops Nordenskjold glacier rumbles down to the sea.

The evening was spent in relatively calm weather will gather in the deckhouse enjoying a pub-quiz in this fantastic place were to spend the following hours sheltering from the passing Low Pressure system that has been affecting us since yesterday. And again, it showed to be a good decision. With the darkness arrived the first gusts. From light E-ly wind, it shifted to S-ly and SW-ly and raised fast to about 30kn. Just a warning for what was about to come in the next hours.