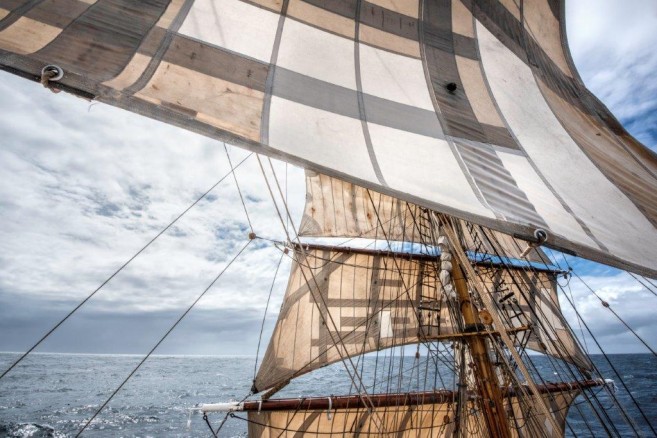 It is now several days since we left Montevideo. we started with the most beautiful weather, that however soon changed in windy, rainy days. The waves got higher, the wind stronger and rain and hail came over us. Then after a period of less wind in the wrong direction and some motor sailing we had two beautiful days with sun and wind in a good direction. Sailing towards South Georgia and hopefully catching up the time that was lost with the strong current counteracting us. Strangely even with the strong winds we were not very fast. It finally turned out that for a while we had very strong counter current slowing us down to a slow moving old man/lady. Our captain Eric explained the situation by showing a map of the current on the surface of the ocean. In beautiful colours, resembling a blow up of a late van Gogh with its blue, green and red curves representing the currents it showed that we were right in the middle of the most heavy surface currents counteracting our sailing. But now we sail as swiftly as an albatross in the good direction. Beards are growing and the daily routine slowly finds its way in the population of the bark Europa.  Watch, sleep, food, social interaction and reading forces a regularity upon us that is difficult to avoid. The 13 fellow watch persons from the red watch will be my major reference point for the whole journey to come and that feels good. We are getting accustomed with several aspects of sailing and sail handling. We are instructed by the crew and until now we had several lectures and there will be more as there is so much to tell and explain on the art of sailing, the ocean, wildlife, South Georgia and Antarctica. With great respect I saw the crew working on the ship in the windy period, up to their waist in the over gusting water or up in the mast doing their thing, nothing seems to be a problem. Even the chef and his helpers managed to produce the most delicious meals while everything including us was flying around. In the time to come more stories will be told and more stories we will be part of. South Georgia and Antarctica are the promises that are ahead of us. South Georgia here we come. Keeping the pressure on the rudder and thinking of you.