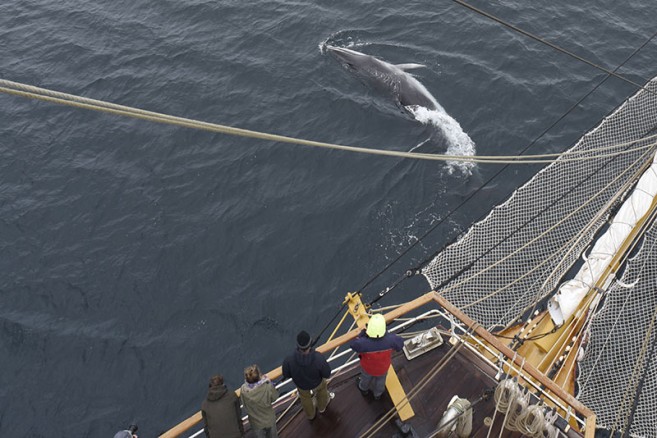 The year has been icy so far. As we left the South Shetlands behind and continued our journey further South, we arrived to a landscape of ice. Enormous rivers of ice flowing down to the ocean : the glaciers.Icecaps covering bigger and smaller islands. Crevasses. Bright blue ice. Sea ice and ice with seals. Glacier ice with sand. A thin layer of new ice this morning, like a soft cover on the ocean, And than – in the morning – ice that decided our Southernmost point. We were stuck. Our plans to land on the Berthelot Islands got stuck too. So we spent the morning watching the ice around us – from all different angels Bark Europa provides. Stuck in the most beautiful way.

Maybe the weather was not that perfect, maybe it was a pity we could not see the steep mountains around us and maybe the snow blowing horizontally into our eyes did not make things easier – but this time the famous Lemaire channel decided to surprise us with something else than its magnificent scenery. As we were finding our way through the ice, a minke whale approached the ship and stayed with us for a good half our. Swimming close the the bow as if she was a dolphin, jumping out of the water as if she had a look, turning regularly in the water so we could see her bright underside.

January 4th was a day filled with snow. We landed on winter island – the snow hitting our faces horizontally, sinking knee deep into the whiteness with every second step. But we all made it to Wordie House at the other site of the island – as the very first visitors this year. We also made it back – since the channels we often use for a pick up right at the hut were still frozen. Covered in melting snow we arrived at Vernadsky station – where we all warmed up in the Southernmost bar in the world. Coming back on board we realized the crew had been very busy while we were gone – the main deck was transformed into a big tent, in which we found our bosun Finn and engineer Diven smiling behind a huge warm barbecue. Antarctica is full of surprises – Bark Europa definitely is.