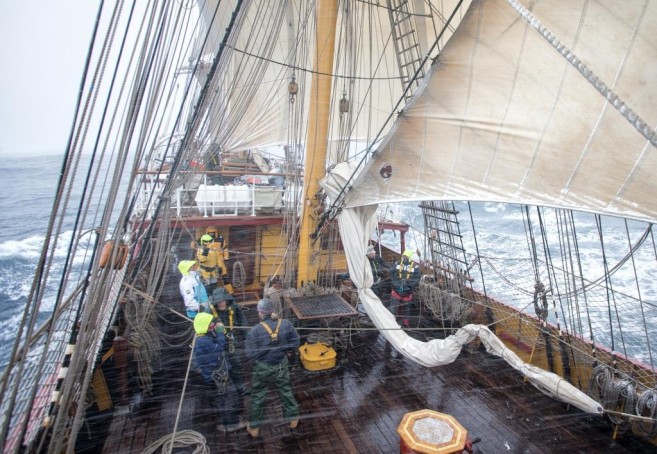 During last night and early hours in the morning we are still fighting the many squalls that hit us since a couple of days ago, but the wind finally slowly starts backing towards the SW, and decrease in force, with the exception of the moments when the showers pass by.

In the morning we take the chance to set squares all the way to Top Gallants, even if we have to take them off when the squalls wind increases, just to set them up right afterwards. The Outer jib comes up and down countless times, and the same happens with changing Desmond for Monkey. We need to gain hight towards the West to clear all rocks and islands of the Southernmost Patagonian channels, keeping the sailing close hauled on Port tack and steering as high as possible.

Awesome, hard and tiring watches, while racing against the clock, longitude, squalls, high seas and currents. We are having a taste of what they experienced on the old times when, after the exploration trips, this became a major trading route for sailing vessels, when they got no engines at all, comfort on board was practically inexistent and they couldn’t enjoy the great food we are having.

In the day the winds become more steady and decreasing, the showers are not hitting us so often and with all that we have again good chance to set more canvas, all the way up to Royals and from Gafftopsail and Spanker, all the way forward to the Outer jib on the jib boom and the Storm-Foretopmast-staysail is replaced by the larger standard. Also the lookouts are back on the Pop deck, but the Captain, Mate and able crew take over the steering, the wind changes constantly in force and direction when the squalls track over our heads. Our priority now is to squeeze every knot on speed that we possibly can and head on a NW course without loosing any Longitude. But as soon as our speed drops to 3 knots the current that flows against our course pushes us. The Swell together with the Sea are also not really helping to our progress, but they are forecasted to drop down. For the moment we keep sailing for as long as possible and see where we end up on the Chilean coast.

At noon our position is 114nm from Cape Horn on a 084º bearing, still a bit to reach the 55º 58’ S of latitude where the Cape is located. During the afternoon the weather looks pretty good, with sunshine, partially covered skies and low temperatures, but we can see in the horizon huge clouds growing and showers around. Taking advantage of one of these intervals of relative calm between the squalls, a broken leech line of the Main Top sail, that snapped last night during one of the wild showers that hit us, is replaced for a new one. In the late afternoon, evening and night several squalls hit us, all of them behaving different, with more or less wind, more or less snow or even hale. Crew and voyage crew on watch spend most of the watches on stand by and jump on deck when sailhandling has to be done, taking the outer and uppermost sails away; being the Outer Jib, Gafftopsail , and setting them again straight away when the conditions get better.

The wind veers more to the West, and our course starts becoming more Northerly, on a course that gets us closer to the Chilean coast, when what we actually want is to gain more height Westwards. At a point about just after midnight we decide to wear ship again, to head Southwards and don’t loose longitude while waiting for fair winds.

Hello Jordi,you are vrey busy with writing. I read in the newspaper here that Douglas Tompkins died. He was very rich and bought large pieces of land in Chili to safe the nature. I think you spoke over him on the trip to Antartica. Nice to read that you have rounded Cape Horn. Congratulatiens.My hand is getting better. Best wishes for everybody.