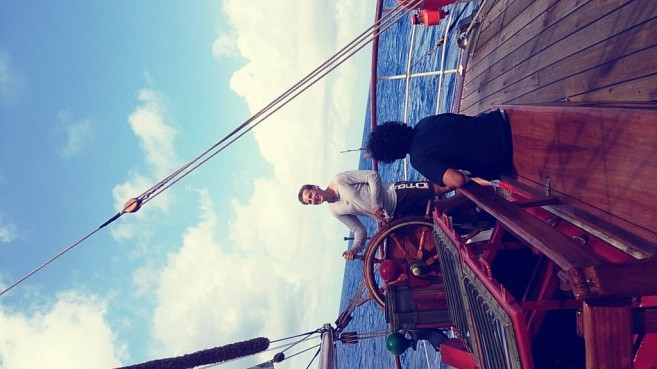 After creeping through the doldrums, we finally got some SE trade winds.

After creeping through the doldrums, we finally got some SE trade winds. Our Voyage Crew is thoroughly drilled and had the sails set in no time. Turning of the engine was a relieve. Finally the Ship was under a healthy heel again and clipping along nicely.

The first part of the trip consisted of mainly downwind sailing. From now on to Salvador we will be close hauled on a Port Tack (sails on the starboard side). On this side of the Equator we have an East going current called the counter current. Counter to what??? Counter to the Equatorial current running in the opposite direction to the West. This is caused by the trade winds that blow from the East to the West every day of the year.

For now this body of water will eliminate our drift. Once we have crossed the line it will be the other way around. This is why sailing ships are advised to cross the Equator between 24 and 29 degrees of longitude from October to December. By doing this we allow for a set and drift of 24nml daily. This should be enough to keep us clear of the North coast of Brazil.

Although the trade winds are a year round feature the associated doldrums belt (Equatorial Trough) shifts with the seasons. Depending on the suns Declination (or Latitude) the belt of trade winds will be more to the north or the south. Normally the Southern component will punch through to about 4/5 degrees northern latitude at this time a year. Creating a windless area (the ITCS, inter tropical conversion zone) 3 to 4 degrees further north. October, November is also the time of year when the Monsoon rains come of the African coast. They bring torments of
rain together with heavy squalls.

Trying to make use of every shift, the variable winds have kept us at the braces. Good practice for tougher times to come. We have left the squalls behinds us and eased the sheets. With a steady south westerly course we continue our chase after the sun. Will we catch her before Salvador… Maybe Neptune will have an answer in a day or two.

It´s great to hear from you and how the sailing is going on. I wish you always "eine Handbreit Wasser unterm Kiel" and please go on telling us something about your journey. Regards to my beloved daughter Emelie and her friend Jessica. And enjoy the trip. Sanne Breunig