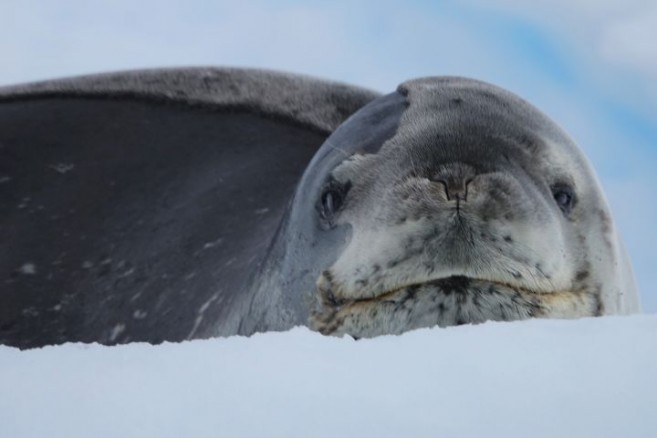 The scenery of the area is great. Open wide spaces along the shoreline, framed by Neptune’s Bellows cliffs on one side, and a loose scree ridge over Kroner Lake at the other. And amidst the rusty coloured volcanic landscape, lie the whaler’s facilities. Houses, water-boats, high-pressure blubber boilers, oil tanks and some of the buildings are visible, all to process the countless whales that the catcher ships were hunting all around.

The area seems quite desolated and quickly jumps to our eyes the lack of teeming wildlife, like we have had until now on all our landings. Now and then solitary Gentoo penguins stop for a while to take a breath and enjoy the solitary beach, few Skuas fly around and some Kelp gulls nesting on some of the structures. A few Fur seals were also snoozing on the gravel beach and even inside some of the buildings and structures. The walk climbs up over 300m of altitude through the desolate landscape along valleys and slopes reaching a couple of great viewpoints over the inner side of the caldera and the outer waters of the Bransfield Strait. Then the inexistent path turns on a NE-ly direction to the prominent headland Baily Head. We take approximately an hour and a half to reach our goal, in windy and cold weather, over gravel ground, slopes, snowfields and easy glaciated terrain. And then there we are, outstanding scenery reveals to our eyes as we reach the upper hills of Baily Head. Green slopes raising to the top of steep cliffs create a sort of amphitheatre where a stream drains a large bowl-shaped valley with hummocky topography, framed on its South side by a glacier covered with layers of volcanic ash. The valley and the hills around provide nesting territory for an estimated 80.000 pairs of Chinstrap penguins, nesting in large, tightly packed colonies scattered throughout the volcanic landscape. Some of them even occupying the higher ridges, making us wonder how come this little fellas can make their way every second day so high up the hills.

Getting colder and colder we decide that it was time to head back, also to have time enough for exploring the Whaling remains of Hector Whaling station before re-embarking the ship to have lunch. The way back is faster as there is not so much climb involved, although in some areas the steep slopes of volcanic ash covering icy zones slow our pace. Boats pick us up in front of the whaling remains, and once on board, the Europa motors a few miles to our next destination, Pendulum Cove, favourite spot for an “Antarctic swim”. Even though the last eruptions took place about 50 years ago, the thermal activity is still heating up the beaches of Port Foster, and Pendulum is one of the areas where the thermal activity is high. Besides going ashore for our afternoon bath, the remains of the Chilean Base Pedro Aguirre Cerda lie on the background. The Station was destroyed by the 1967 eruptions, and all personnel were evacuated from here successfully. What is left from the buildings is bent and curved, sticking out of the ground in the barren black landscape. And in front of it, close to the shoreline we are lucky enough to spot a Weddell seal. After spending a while checking the seal and the remains of the station, most of all were eager to test the warm waters of the shoreline. Soon swimming suits take over foul weather gear, and we lay flat on the shallow ponds of hot water, just at the tide line. Some of us are brave enough to jump into the cold seawater just to run back to their warm spots at the sand.