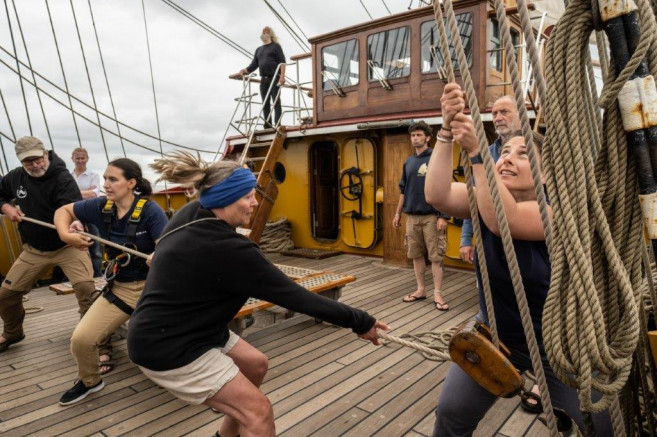 Sailors and rest of crew have been running the maintenance of the ship for long time since she was riding the waves on a long voyage. Routine broken not so long ago with a week-sail with college students as a first experience at sea again after more than a year and a half. Last days, their minds drifting with adventures at sea to come, while hands-on rigging masts and yards, bending-on sails, sanding and varnishing wood, repairing and keeping systems working, cleaning, re-storing and preparing the seaworthy Europa for welcoming guests and set sail to the North Sea winds.

Today she let go her mooring lines that were tying her hull to Harlingen harbour.

The driving force within held firm. Like a gale of wind it held-like a winter’s gale in the high latitudes-blowing day after day in a roaring headlong drive, with the rays slicing masthead high and the vessel rolling down to her sheer oles, yet all the time shouldering the hungry seas to one side and making you smile and to hell with the wind and the sea-to hell with everything. You are on your way.

Fourteen guests and the same number of permanent crew, full water and diesel tanks, the newly refurbished provision areas filled up with supplies, worn out and new charts ready for planning the voyage. All within the Europa’s sturdy old hull crowned by a bark-rig which frames squares up to Skysails and 12 fore-aft sails, ready to be set.

By the morning high tide, under light Northerly breeze the engines started, and she made her way off the harbour. Previously, Top Sails, head rig, Lower and Middle Staysails, Spanker and Gaff Top sail have seen the crew climbing and unfurling them. Down below on deck, Mate have already gathered voyage crew for the mandatory pre-departure safety drill.

It didn’t take long for all to join efforts pulling on braces, halyards and sheets, ease buntlines and clews while we head to the semi confined and shallow Wadden Sea. On a Starboard tack and motorsailing its busy waters, she made her way along (and sometimes through) traffic separation schemes, leaving sailing and cargo vessels port and starboard, and keeping a good distance from windmill farms and oil platforms.

The setting of all our canvas and turning the engines off had to wait until the afternoon, when Europa left behind the gate to the North Sea, framed by the Frisian islands of Vlieland and Terschelling. The morning was the time for continuing with familiarizations and instructions for the voyage crew. Sea watches were assigned, lines spread all over decks were coiled, rope-handling, lookout and helm tutorials were given. From now on, they will take care of those duties most of the time, supervised and assisted by the permanent crew.

A good day for an easy start, under dry but overcast weather and light winds, that made for a slow progress on a Northerly course.