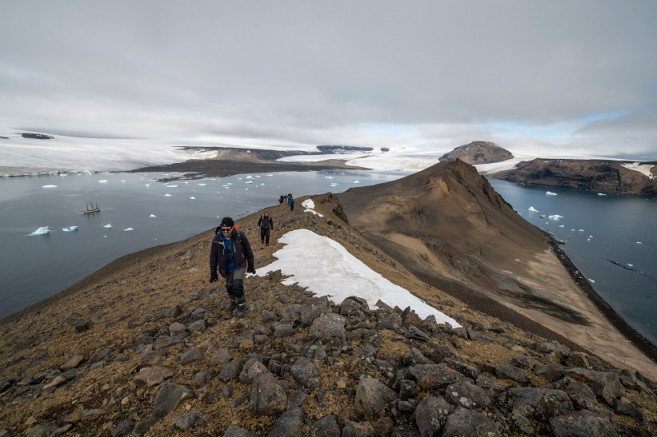 Erebus and Terror Gulf, Named for HMS Erebus and HMS Terror, the vessels used by Sir James Clark Ross in exploring these waters in 1842-43, the place where we spent the night after getting off the Antarctic Sound through the Fridjorf Sound. A couple of brash ice bands made for slowing down during the night, until finding a good clear area where to drift just a handful of miles from Vega Island north coast.

Our morning destination for a good excursion ashore was Devil Island. Tucked in a large embayment of Vega, offers great opportunities for hiking and for good wildlife experience.

Both islands were discovered and baptised by the SwedAE, 1901-04, under Otto Nordenskjöld. The first one, named after the ship Vega used by his uncle in making the first voyage through the Northeast Passage, 1878-79. The second got its label apparently for its resemblance to de devil’s horns, with its two twin steep peaks.

Visible throughout our landing, the large prominent escarpment of Cape Well-met, the closeby headland of Vega Island, is yet another familiar feature in the Nordenskjold saga. A place with hits of merriness in an otherwise story of Antarctic struggle for survival. Here the three men stranded overwinter in Hope Bay literally walked into Nordenskjold’s sledging party, while they were exploring the Prince Gustav Channel on 12 October 1903. They had an important message to deliver to Nordenskjold, Their ship which was supposed to pick them up from Snowhill Island, had crushed and sunk in the icy waters of the Antarctic Sound.

Surrounded by such distinguished landscape, soon after breakfast zodiacs landed everyone at the foot of the saddle that separate both mountain tops of Devil island.

A flat plateau led us to the northern shores of the island, where the open waters peppered with icebergs and bergy bits of the Weddell Sea reveal to us. Far at the background the good visibility allowed for good views of the Antarctic peninsula glaciated coast and the rugged James Ross Island. Groups of mounting Adelie penguins look for shelter behind rocks and the ice washed ashore, amongst the numerous Fur seals resting along the beach. In between all of them, lays a lone young Elephant seal.

From there, a faintly trodden path show us the way up the West island’s top. An easy climb to a vantage point for a magnificent panorama of the area. Atop, hiding amongst the rocks a beautiful Snow petrel seem to be having a rest. Maybe an inexperienced newly fledge youngster or an injured adult, trying not to be very visible to the hungry Skuas flying around.

The Devil still have a second horn, and there we went with a smaller and more adventurous group. First over rocky slopes, the hike then follows a narrow ridge to the top. Time for a couple of pictures and then, following approximately the same route we took for our way up, it didn’t take long to be ready at the landing site to be picked up back on board.

Having a look at the weather forecast and the miles to go to Elephant island, it was necessary a slight adjustment on the planning of the trip. That will add an afternoon landing at the southern area of Vega before start our way northwards for tomorrow’s visit to Paulet Island. Not just the new plan was good for a call to a seldom visited area but also while repositioning the ship we could all enjoy a couple of good Humpback whale sightings, with small groups of 2 to 3 feeding individuals, often also showing their flukes as they dove.

A couple of hours drive let us at False Island Point, the mile-long narrow headland, connected by a low-lying isthmus to the South side of Vega Island. The place offers a good panorama over the mountainous scenery and the numerous icebergs stranded along the beach.

First thought to be an island, it took from its first reports in 1902 to  the 1945 British Expedition to determine that the rocky point was actually part of Vega Island, applying to the site its curious name.

To the South, rise the high cliffs and glaciers of James Ross Island, to the West the so called Herbert Sound, channel that running between Vega and James Ross Island. The heavy ice conditions that this waterway use to show, made for the first expedition sailing these treacherous waters to think it was just an embayment. On January 6, 1843 Captain James Clark Ross visited the area, naming it after Sidney Herbert, First Secretary to the Admiralty, 1841-45. About 60 years later, the Swedish Expedition revealed its true nature as a channel.

After the ship drops anchor, there we landed, amongst the many Fur seals and scattered groups of Elephant seals. A few large males stand out from young individuals all packed together next to each other.

A good look at all those superb landscapes and enjoying a beach full of seal life was followed by a nice hike up the headland’s hills for a breathtaking truly Antarctic scenery. Vega and Ross ice caps slope down to the sea on numerous glacier fronts, and icebergs freckle the surrounding waters. From there, a steep descend brought all to the landing site and soon we were all back on board, anchor heaved and the Europa was ready to start making her way overnight. On a northerly course to the south of Dundee Island where the picturesque volcano of Paulet Island is located, we motored across bands of drifting ice and open waters, in light breeze at the beginning that became strong headwinds as approaching this destination.