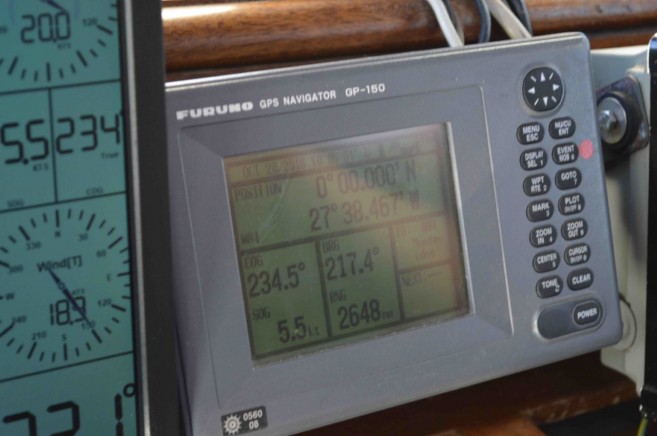 Doldrums. This crossing it was not so much about no wind, but about the direction of the wind. We met the SE’lies at 5 degrees North and when the wind stabilised we changed course to the SW. This part of the voyage was completely according the Ocean passages for the World. Winds of 10 knots, varying between SE and SSE, forecasted to shift to the ESE. That last part did not really happen for a while. Certain bits we could sail, but in the end the Equatorial current pushed us hard to the west. We spend a bit more time under engine, to prevent us ending up to close to North Brazil. It were squally day and nights. Wind shifts into various directions with a great variation in force and big warm raindrops poring down every once in a while kept the crew and voyage crew busy. Setting all sails, taking them away, bracing, setting sails, bracing again… Putting on foul weather gear, taking it off, apply sunscreen, get wet, put on dry clothes, apply sunscreen again… A widely spreading invention was the “pull up your shorts so high that they fit underneath your jacket so that they don’t get wet”.  Which looks a bit weird, causes a good laugh and is above all highly effective. Upon closing in onto the equator the wind finally decided to shift and our position was east enough to set all sails and keep course in a southern direction. Close hauled sailing we crossed the line the 20st in the morning. The Pollywogs on board looked happy, but started to get a bit nervous at the same time. Uncertain when to expect a visit from Neptune they speculated about the time and tried to bargain and bribe to make sure not to end up bold. They should have know…it doesn’t work… Today was the moment that Neptune and his court arrived on board. By the end of the afternoon all were relieved. With a lighter hart, crimes paid for and a Shellback name, all are ready for the second half of the voyage to Montevideo. The atmosphere is good, the nights are moon lit and the winds favourable. Let’s see what adventures the upcoming week will bring.