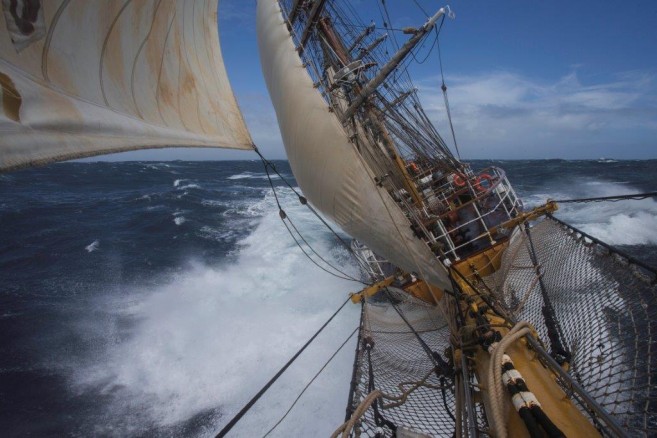 The most important piece of equipment on board couldn’t resist the wild wake up that the Drake got since last night. Our beloved coffee machine, that has been keeping awake countless sailors since many years ago, welcoming them to every of their watches, just broke up. Deckhands squeeze their brains in distress looking for a solution, when due to the heavy rolling and pitching we experience a black-out when one of the generators fail. Definitely was time to call for reinforcements, and not just anybody, but our engineer Divein himself. They actually dare to wake him up at such early hours of the new day, and of course he comes up with some genuine solution and shortly afterwards power comes back and also we can enjoy again our tasty coffee.

Sir Drake has woken up not in the best mood, unleashing menacing squalls over us since the early morning, and seems it will take a while to calm him down again.

Wind blows hard during the journey, with steady 30kn from the W and WNW, but not just this is making a challenging life on board, also big swells make the Europa pitch and roll. Everything spiced up by countless squalls and showers sweeping the ocean we are sailing, with associated winds of over 40kn and often close to 50kn.

Under such rough and tempestuous conditions is important to keep the steering properly, small mistakes could lead to problems. It is also difficult even to keep standing on our feet in the ship, not to say on the poop deck under pouring sea spray and the wild pitching and rolling movements of the ship. So when the blustery weather started, Captain and our Mates take over the steering and manoeuvring of the ship from the wheelhouse. Voyage crew spend the watches in standby and doing the necessary lookouts, now moved from the wild Fore-deck to the more civilised Poop deck. From there countless pictures have been taken today while waves break over the ship, washing the Main deck, as Europa lean over heavily to Starboadside.

As the day goes on, the conditions worsen. During the morning we still motor-sail under Lower and Middle Staysails, all our head rig and the Spanker, but the frequent and sudden blows ask for reducing sail. In several occasions crew strike the Outer Jib and Mizzen Top mast Staysail just to set it again when the showers pass by. But  later on, the untamed conditions in this ill tempered Drake Passage ask for keeping all sails furled but the Lower Staysails, Fore Top Mast Staysail, Inner Jib and Spanker, and over the Main deck substituting the larger Desmond for its small scale brother, the Aap. With this “squall weather sail configuration” and the help of both our engines we reach speeds of about 5kn, many times even less than that when bearing away during the stronger gusts.

Those W-ly and WNW-ly winds come together with big seas. Actually the swell hitting us has the whole South Pacific as a fetch area too grow, un-interrupted by any land at those latitudes. Like this Europa find herself riding those big seas, with waves rising up to 6 or 7m. In combination with the strong gale winds and the showers passing by, waters sprays over the decks and often waves come all the way even over the  poop deck.

Under the howling winds and mountainous seas, crew regularly has to walk around decks checking if all is still in place or looking for some displacement of equipment or any damage. One task it had to be done this afternoon is tighten and re-furl all Staysails and Outer Jib, which gaskets were getting loose to the powerful nature’s elements of the Drake.

Temperature increased now that we sail on those Sub-antarctic latitudes, making more comfortable to work aloft or to be on the poop deck on lookouts, despite the howling winds and passing squalls.

It was not until late afternoon when the general conditions seem to ease a bit. The slight improvement called for setting a bit more canvas, and soon the Main Lower Topsail is unfurled and clued down followed by the Fore one.

A real day in the Drake, which some of us were hoping for, while others didn’t dare to even think about it, preferring the calmer situations than experiencing the continuous feeling of being inside a washing machine.