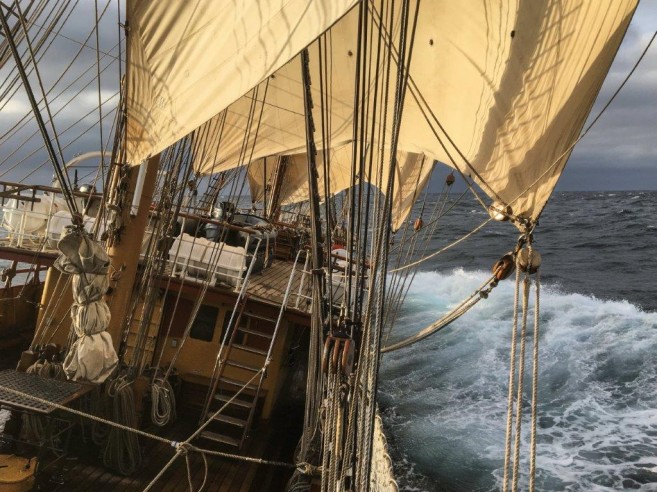 Variable winds from the WNW to WSW during the early hours of the day, blowing at any speed between 15 to 30kn made for a night of variable speed and slight course changes in a generally NW-ly direction. After a quick start, the wind died down during the early hours of the day, still being variable between W-ly and NW-ly. Staying on a close hauled course our track gradually bent towards the North and Northeast, diverging from our planned route to gain terrain towards the Pacific Ocean. That was the time when we decided to stop the ship for a while waiting for a better wind direction. Like this we hove-to, bracing both masts in different tacks. With the fore mast taking the light breeze while the main mast backs, it is possible to practically stop our progress. After a few hours in that way, after breakfast, it is decided to drop all squares, furl the topgallants, brace the main mast yards on port tack and start our engines. For the rest of the morning we keep motoring and motorsailing the winds from the West. With the wind increasing to 40kn during the afternoon and rest of the day, but blowing from a slightly better WSW-ly direction, the captain decides to set a bit more canvas. The courses and lower topsails are set and with the engines still running, we are back on course. At the same time the seas started to rapidly build up, and for the rest of the journey Europa deals with huge swell hitting us from a NW-ly direction. With both our engines on, it’s easier to keep course and speed in these wild seas, while the ship pitches, heels and crash against the big waves. Even though it would be a fair wind for sailing, the high seas hitting us would do for slowing down our progress, while giving a tremendous hard time for the men at the wheel and increasing our leeway towards the east. At this point of the trip and with a small weather window with relatively good winds, it is important to keep our speed at about 6 to 7kn, to reach the Beagle Channel and Ushuaia at the scheduled time. With a big reputation of being one of the hardest seas in the world to navigate, we can just imagine how it would have been in the old times and voyages of discovery. Today we enjoy the commodities of our bark Europa, built over a 100 years ago, but refurbished and conditioned for us to have a good time. But while riding those untamed seas, it is good to remember the struggles that they represented for many navigators in the past, amongst them Sir Francis Drake, from whom this passage takes its name. In his voyages he was mainly looking for raiding Spanish ships, sailing back from their new conquests in South America. But his most important achievement came from a trip around the world during the years 1577 to 1580. That voyage was probably planned as a raid on Spanish ships and ports, but it actually helped to give a more accurate picture of the true geography of the world.