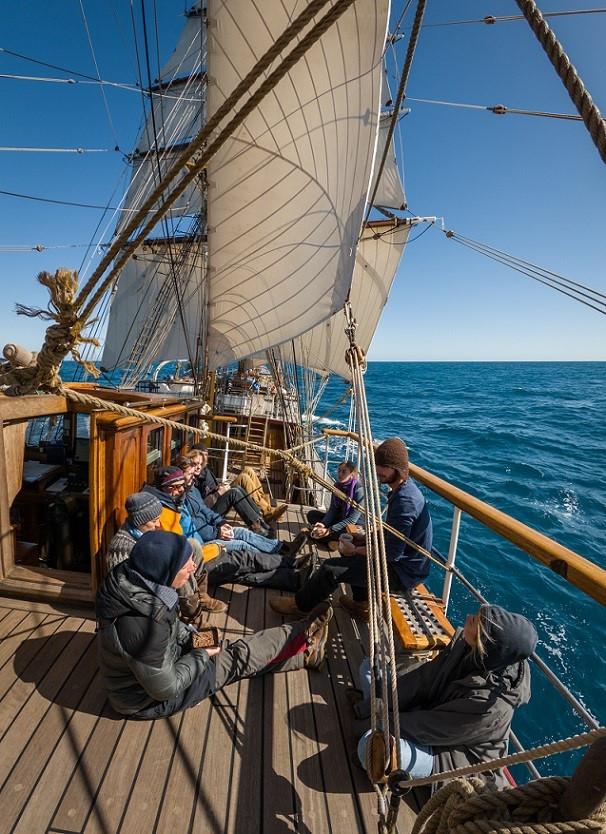 Today, the volatile nature of the Drake Passage expressed itself with sustained wind shifts throughout a journey under sunny skies and good sea state.

A morning when Europa can still keep her sails up and make good progress on a convenient 290º course. But the steady breeze already had begun to veer from Southerly bit by bit to a more Westerly. By the early afternoon 10kn of wind blow from the Southwest making for bracing from the broad reach we have been sailing for the last day to a beam reach. Like this more canvas can be hoisted. Middle Staysails and Spanker join the configuration. Not for long, as the gradual veering of the wind makes for keep pulling sharper and sharper on the braces. Next step was to douse all squares first and face the Northwesterly under engine. Still later on, steering straight into the wind, the rest of the canvas is pulled down and stowed away. The night goes on making good progress, though using both of our engines under bare stays and poles.

Enjoying the spectacular sailing or one the other hand using the engines, the combination of both during the last 24 hours have brought us about 115nm closer to our destination. The ship gradually is leaving behind the Antarctic waters and entering the Subantarctic world.

Despite looking as one great undistinguished water system, the ocean is not a uniform environment. Both deep and surface currents stir the seas, invisible thermal and salinity boundaries separate water masses, and, far to the South, ice advances and retreats in an annual rhythm 0.4º, 1.5º, 2.1º, 3.0º, 4.5º C from the iceberg filled waters along the Antarctic coasts to just enter into the 50’sº South of Latitude hundreds of miles away from land in the middle of the Drake Passage.

The last rapid increases of the surface water temperature indicate that we sail now over the Convergence Zone or also known as the Polar Front. All around Antarctica, the colder denser waters from the South, sink along this area under the lighter and warmer waters from the North, creating an area of mixing and vertical turbulence in the ocean surface layers.

The rapid temperature change across the front is linked as well to the massive eastward flow of one of the world’s great ocean currents, the Antarctic Circumpolar Current. Stretching for more than 20,000 kilometres around the whole Antarctic continent, is driven by some of the strongest winds on earth, the same ones that had made famous and named the Roaring 40’s, Furious 50’s and Shrieking 60’s degrees of Southern Latitude.

This strong circulation came into being when Antarctica and South America drifted apart and the Drake Passage was gradually opening, a process that begun approximately 30 million years ago; and although it sustains abundant life in the Southern Ocean, it isolated the southern continent from the rest of the planet. Antarctic Temperatures plummeted and the largest ice sheet in the planet began to grow.