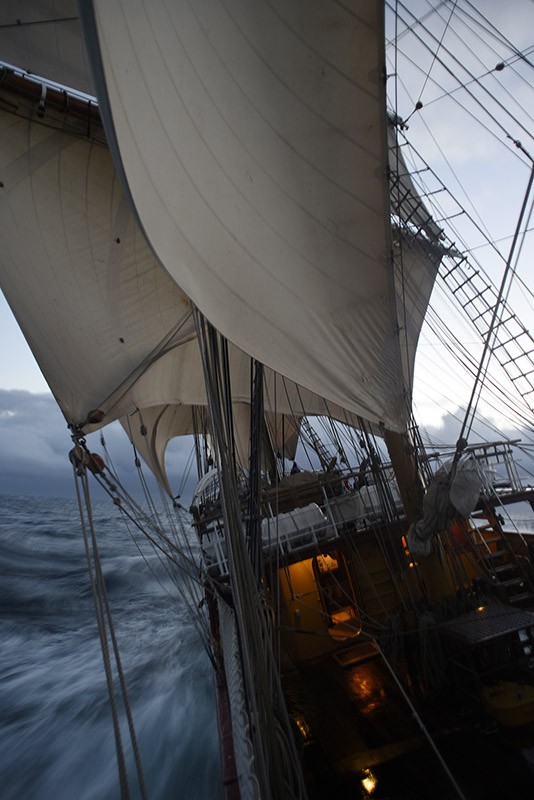 In the evening, just after dinner, we all meet in the deckhouse. We are still close to Isla Nueva, but slowly we will be leaving the protection of the islands and are entering the open waters. Not just some open waters, but one of the stormiest seas in the world, the passage between South America and Antarctica. We are heading out on the Drake and will be out there for some days. Almost 500 miles of sailing – we´ve done 90 so far today. Coming from the North, the Drake offers some very strong currents in the first 100 miles, flowing from West to East. As they pass the narrowest part, the Southernmost islands and round Cape Horn, the current turns back into the open waters and creates some interesting phenomena, like eddy currents. We are now at this part of the confusing sea – movements are sometimes surprising, and it will not be long until the first famous buckets start to appear. Strong and nice winds blow during the night. Every now and then a squall passes by, bringing rain and a sudden 40 knots of wind. Almost all of our sails are up – last evening we have added the two courses and our speed has been constant between 9 and 11 knots – with an impressive maximum of 11.5 knots. As a comparison; the average speed we hope for or count on when making the schedule is 5.8 knots. We are expecting less wind, things will change for sure, but for now we are enjoying a very good stretch of sailing. All fine - the Drake is treating us well.

Are there know enough buckets?