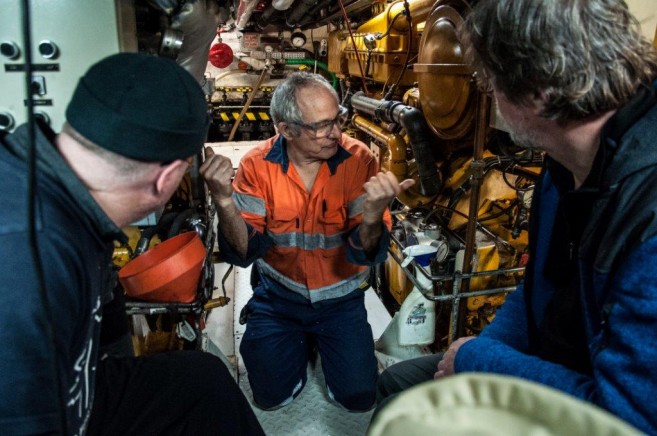 Fair winds still blow during the whole day. We find ourselves on the wind corridor between a High Pressure System located North of us, and a Cyclonic system sweeping over the Roaring Forties. Keeping our course slightly North of the 40ºS, on quite steady barometric High Pressure close to 1020hPa, Europa enjoys a constant flow of fair NW and NNW-ly winds, pulling us at a good speed Eastwards.

The stable winds actually pick up and ease slightly in a couple of occasions during the day. Before dawn blows to 25kn, making us strike and furl Main Royal Staysail and Flying Jib. The latter one just to be set again at sunrise, when we are welcomed to the new day with blue skies and not even a single cloud to be seen in the sky. The spectacular weather lasted until the late afternoon when it becomes hazy at the same time than the wind eased down for a few hours to about 15kn.

In the afternoon, under the constant good breeze all remaining canvas is set and remains like this for the rest of the day. The wind picked up again a bit, up to 20kn and started to veer to more N-ly as the night comes.

For the whole day once more Europa rides her way under full sail, braced between Broad and Beam Reach on a E-ly bound course.

The points of sail of Reaching refers at when the boat travels on a course at a range of angles spread on approximately 45º to or from the wind. Beam reach is when the course is at a 90º to the wind, while Broad Reach indicate that the wind is coming from behind the ship at an angle, steering slightly away from the wind. If the course to follow is slightly upwind, then the point of sail is called Close Reach, until trying to sail as close to the wind as possible, with the yards braced sharp on Close-Hauled.

Reaching is the fastest way of sailing, and for the Europa, with her current rig and hull shape, about Beam Reach is the fastest, as we are experiencing lately, squeezing up to 9kn of speed on a 20kn of wind. But the Europa was not always the beautiful sailing ship we see nowadays, with her Bark-rig to sail the favourable winds of the traditional sailing routes worldwide. As Captain Klaas told us this afternoon on his talk about the ship, Europa has roamed the seas on that fashion since 1994, but she was actually launched in 1911 as a light-ship for the Elbe River. Built at the Stulcken shipyard in Hamburg, and with the name of 'Senator Brockes’ was put into service as Elbe 3 light ship. She was first named after the German poet Barthold Heinrich Brockes (1680 – 1747) which influential poetry was representative of the change on the German literature in the beginning of the 18th Century, with texts essentially paying tribute to the natural world.

In 1720 Brockes became a member of the Hamburg senate, thus the old name of the Bark Europa. In 1986 what was left off the ship was brought to the Netherlands and during 8 years she was refurbished and rigged as the three-masted bark we are sailing today across the South Atlantic. Not just her rig was completely changed but also she was equipped with modern sailing equipment, berths, toilettes, fuel and water tanks, fridges and freezers, and all what makes her what we can experience nowadays, including two Caterpillar 365hp engines. Today we got the chance to visit all the areas below decks normally off limits for all of us, including the engine room, accompanied by our engineers Trevor and Greg. On her elegant way through these waters and today without the help of those engines, Europa has sailed 191nm at an average speed of 8kn during the last 24h. Following a proper routing to Cape Town, counting with winds and currents fore-cast, still 1157nm lay ahead of us.

On our today’s smooth ride we sailed over the Discovery Seamounts, rising steeply from the abyssal plains over 4000m deep to their tops reaching 174m underwater. Like we could see yesterday as well, the deep and flat sea bottom topography rocket to much shallower waters as several underwater peaks. The flanks of those volcanic cones appear to be precipitous slopes, common on those kind of structures. The erosion underwater is slower and follows different patterns than on land, where the wind and weather act as a rounding agents over the volcanic buildings.