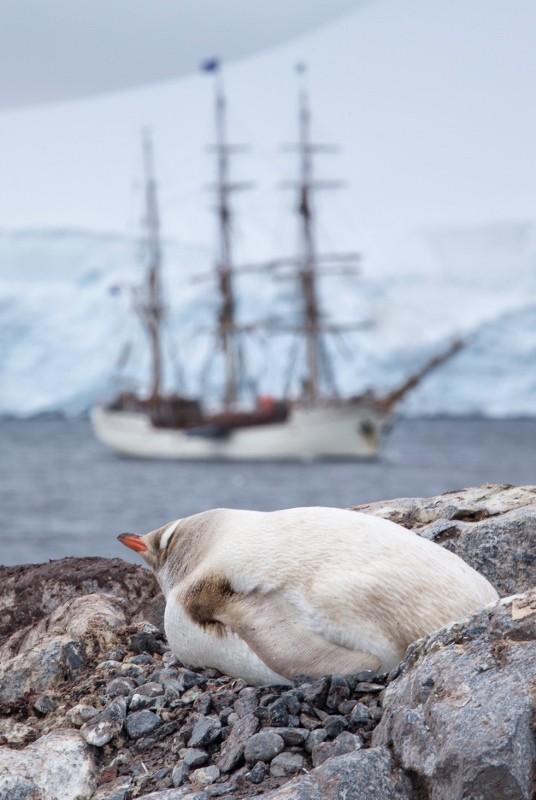 As soon as we embarked from our last evening landing, at Brown Base in Paradise Harbour, we started our way South under engine, dealing with head winds up to 30 knots.During the night it becomes snowy and gusty, but by the time we start to wake up, even though the skies are partially overcast, the weather conditions had improved significantly. As planned, at 07:00h Elskarin steered the ship through the narrow gap of Eclipse Point, a spectacular waterway where we squeeze the Europa between ice cliffs and several icebergs before rounding the North side of Cape Renard, the access to the famous Lemaire Channel. The low clouds were hanging over the rough mountain and glacier scenery around, but letting us have pretty good visibility of our surroundings.

High and glaciated mountains shoot up to 900 m on either side of the channel as we were making our way through. Weather conditions were good, with a light breeze and calm seas. This was the moment that our Captain decided to rig up the main topsail yard, while cruising one of the most spectacular passages in Antarctica. Icebergs and brash ice festooned the landscape as we sailed through, but the way South was clear and we could get through. The channel just has been navigable for approximately a week, before it still remained blocked by ice since the autumn. We slowly made our way towards the Argentine Islands, trying to reachour southernmost area of the journey: the Ukrainian Vernadsky research station. During the morning, Zeze opened the ship shop in the library, where we could buy some Europa merchandise, books and maps. Related with this last item, between closure of the shop and lunchtime, Annukka did a talk in the deckhouse about the mapping of Antarctica and the history behind many of the place names.

By that time we were starting to enter between the several islets and rocks that compose the Argentine Islands. This group of islands is separated from Graham Coast by Penola Strait and include Fanfare, Irizar, Uruguay, Forge, Grotto, Corner, Galindez, Winter, Shelter, Skua, Leopard, Black islands and The Barchans islands. They were roughly charted by the French Antarctic Expedition in 1903-05 and named after the Republic of Argentina. Struggling to get through sheets of sea ice and manoeuvring around icebergs, we gradually get closer to the Ukrainian Station from its South side. After sailing through narrow channels between shallows we deal with the last bit of sea ice and arrive to our anchorage close to Winter Island. From our decks we can see Vernadsky Base close by as well.

Around 14:00h the three bells rung and we gathered in the deckhouse, eager to have some news about our activities. Jordi, Annukka and Bob explain about the plans for the afternoon. Then Jordi left with Arran and Krista to find a good landing spot in Winter Island, say hello to the Ukrainians living here for a year and check the conditions of the creeks and channels between the islands, as they look pretty blocked by ice. It took a while, but by 15:00h we were all ready to land and explore Winter Island, where nobody has yet been this season and to have a look into the historical Wordie Hut. It feels good to walk across the island opening our track in the virgin snow, until reaching Wordie. This Historical Site is named after the explorer James Wordie who travelled to Antarctica with Shackleton on the infamous and renowned Endurance expedition. This was the original British base in the area prior to Faraday being built nearby, which was later sold to the Ukrainians for a pound and renamed Vernadsky. Due to the small space inside the hut we have to split into smaller groups so we can all have a look.

It’s hard to imagine, what it must have been like to spend a whole year here! We follow our tracks back to the landing spot and soon we are picked up by the zodiacs to be transferred to Vernadsky. There we had to share our tour to this well-known Antarctic Base with the visitors from the research and logistics ship James Clark Ross. The friendly Ukrainian staff that guided us through their labs for meteorology, geophysics and polar biology warmly welcomes us. Here was the place where the British discovered the ozone hole in 1980, and during the Base tour we could even see the original instruments. In the late 80’ies Britain tried to reduce their expenditures in Antarctica and one of the solutions was letting go of this station. But under an Antarctic Treaty regulation, you cannot simply abandon a Station, but you have to dismantle it and clear and clean the area thoroughly, which would have cost a fortune. At the same time the USSR fell apart. Ukraine had the expertise and wanted to be present in Antarctica as well doing some research, but couldn’t afford to build a new station, so they found a good solution for both countries. The British sold it for a symbolic amount of one pound. This meant that the time series of measurements and research could be continued without interruption. Nowadays the base is inhabited the whole year round by a team of Ukrainians, their numbers being different every year. During our visit, 12 of them have been already there for 9 months, just 3 more to go.

The Base facilities include a fitness room, some basic medical facilities, storage space for all the expedition gear, a sauna and last but not least – a pub, as a remnant from the days when it was in the hands of the British. Nowadays in Ukrainian hands it became a most famous “southernmost pub” where they traditionally serve their home-made “vodka”. Needless to say, we enjoyed our time there, between spirit glasses and the good company of the James Clark Ross crew and of course the local Ukrainians, some of them old friends of some of our crew members that had been coming here in several occasions during the last years. Other amenities are their gift shop and the chance of sending postcards.

But not all was over yet, as we have a surprise when reaching the ship. A tent covering the main deck is up and a party is being set. Soon we can enjoy a great barbeque and a night of celebration and festivity, while our beloved Europa lies at anchor in mirror flat waters surrounded by icebergs.