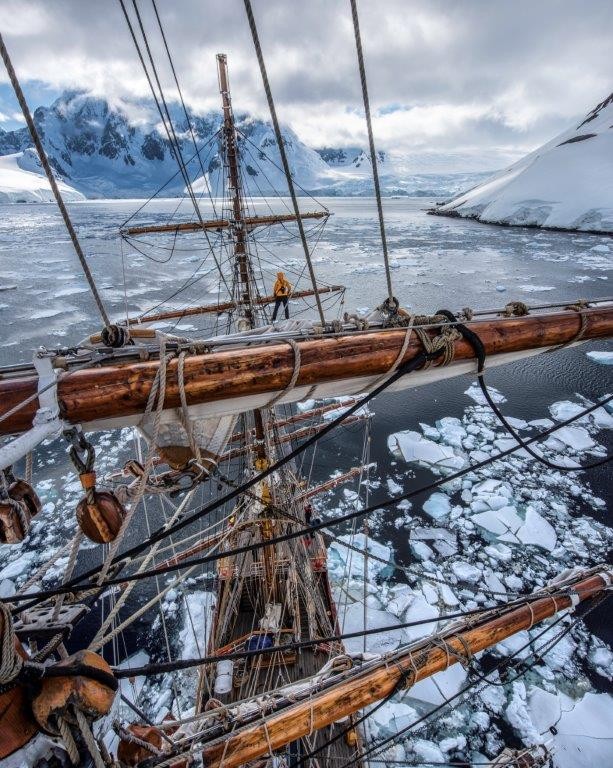 Leaving Cuverville and the Errera channel behind, Europa slowly made her way southwards. As scheduled, at about the beginning of breakfast time, she was about to face the narrow passage at Eclipse Point, that we always use as the starting point of the famous and scenic Lemaire Channel. Big icebergs are scattered around all the area, but luckily leaving a narrow gap between the glacier fronts at either side of the ship, enough for us to squeeze in between the tight strait. Once Europa passed the short but adventurous passage, the more open waters of the Northern side of the Lemaire Channel welcome us. Flat calm conditions and good visibility help for having fantastic views of the impressive twin peaks of Cape Renard, as we round them to face the narrower Lemaire. This picturesque waterway extends in a NE-SW direction between steep glaciers and high mountains about 1000m high, separating Booth Island from the W coast of Graham Land. Even though it was discovered by a German expedition under Dallmann in 1873-74, it was not traversed until 24 years later by de Gerlache’s Belgium Antarctic Expedition. To name this spectacular channel, he chose a Belgian explorer that actually never had any of his work done in Antarctica, but in Congo (Africa), Charles Lemaire. To start with, the waters were pretty ice free, with just some brash ice bands extending across the channel and icebergs here and there, while we all enjoy with great excitement finding ourselves increasingly surrounded by ice. Later on, the amount of flat single-year sea ice seems to cover the entire sea surface, but luckily it is thin and soft, not impeding our navigation. Many decided to climb the rig to have an incredible view of the ship amongst the ice floes, which were increasing in number and extension as we slowly left the Lemaire Channel behind us. Now we were aiming for the small archipelago of the Argentine islands, counting Fanfare, Irizar, Uruguay, Forge, Grotto, Corner, Galindez, Winter, Shelter, Skua, Leopard, Black islands and The Barchans islands, and many more unnamed small rocks and islets. They are separated from mainland by the Penola Strait. The ice-watch up the mast chooses the way that seems less clogged by ice, and the captain steers the ship amongst the rocks and the poorly charted icy waters, first roughly mapped by the French Antarctic Expedition 1903-05 and named after the Republic of Argentina. By lunch time he had navigated the ship to the vicinity of Galindez Island, where one of the afternoon’s attractions is located, the Ukrainian Station “Vernadsky”. Next to it and separated by a channel that still today is completely frozen, lay Winter Island where the historical Wordie House is located. During lunch two of the researchers from the Base came alongside with their rib, actually eager to see people after already having spent 9 months here, including the winter. Apart from a yacht-based helicopter visit, Europa is the first ship that actually made it all the way here in those nine months. Heavy ice conditions in the area between the Lemaire and Argentine Islands have helped for other ships to turn around before reaching them. Some of them actually travel further South, avoiding the icy conditions close to mainland, doing a big detour to the open waters of the Drake before approaching again the Peninsula. But no one yet has ventured through the pack ice to the Argentine Islands. The base-crew offered help to scout the shores around Winter Island and break the thin fast-ice that still surrounds the landing site. All the channels and creeks that surround Winter Island were still filled up with fast-ice, inaccessible for our rubber boats, thus making for a short visit and a walk back to the only spot where a landing was possible. From there a short but adventurous ride through packed ice conditions brought us to “Vernadsky Station”. There we were welcomed on their small wooden jetty by the friendly Ukrainian staff, 11 of them including logistic people, cook, doctor, meteorologists, geophysicists and polar biologists. As they walk us around their base and scientific facilities, we are informed that this was one of the places where the depletion on the atmospheric ozone layer was discovered in 1980. During the Base tour we could even see the original instruments used, and many of them still working nowadays. There is one of the most curious stories about the Station change of hands between England and Ukraine: In the late 80ties Britain tried to reduce their expenditures in Antarctica, and one of the solutions was letting go of this station. By then, Ukraine had the expertise and wanted to be present in Antarctica as well doing some research, but couldn’t afford to build a new station, so they found the good solution for both countries of selling it for a symbolic amount of one pound. This meant that the time series of measurements and research could be continued without interruption. Nowadays the base is inhabited the whole year around by a team of Ukrainians. The Base includes laboratories, scientific instrumentation, a huge generator plant, fuel tanks, galley, dining room, fitness room, some basic medical facilities, storage space for all the expedition gear, sauna and lost but not least – a pub, kept from the days when it was built by the British. The Ukrainians proudly promote it as the “southernmost pub” together with the “southernmost souvenir shop” located next to it. We all enjoy the shopping, sending postcards and having a relaxing time at the pub while trying their local homemade specialty drink. Europa plans to spend the night at anchor next to the Base, thing that made for inviting the people from the Station on board. And so they did, joining the surprise and delicious barbecue on deck, prepared by Hans, Sasha, Judith and the rest of crew. A real Antarctic party, even with local drinks and people, followed the fantastic meal eaten on such fantastic surroundings.

I have just noticed the ship has taken a significant left turn mid ocean? Did someone give my son Matthew the wheel?