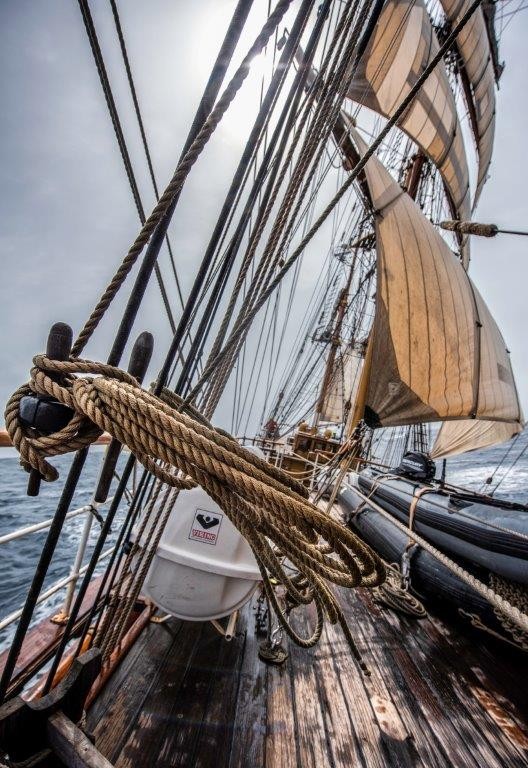 Until just before nightfall, we didn’t experience any major changes in conditions, wind or sea. Europa still sails close-hauled on starboard tack following the slowly backing westerly winds on a course that gradually is arcing to the South, far to the East of the South Orkneys. Before lunch the 35 to 40kn disappeared from the wind meter display, easing down gradually to 20 to 25kn, blowing from the West. While the sun started shining amongst the clouds that masked it the whole morning, also the sea state also abated slightly, making life on board more comfortable. Under this new situation is tempting to set more canvas, but in the wheelhouse hovers the question in the air if we actually need to sail that fast on the course that we can currently keep. That will bring us further south instead of towards the SW where South Orkney Islands lay.
The water temperature dropped to below 0ºC, unusually cold for the time of the year and region where we are sailing. Europa still braves the Furious Fifties latitudes in the morning, but having said that, we already cross into the Screaming Sixties later during the day. A latitude that welcomed us with easing sailing conditions. At the end it is decided to hoist more canvas, and the middle staysails join the lower ones, courses, topsails, fore topmast staysail, inner jib and spanker. For a couple of hours Europa can keep this configuration until the wind picks up again just before dinner-time. With that, the sea state worsens one more time. Rolling and heavy heeling will accompany us for the rest of the journey. Time to strike and furl them once more. Desmond is left hanging in its gear thinking of a possible wind change that never happened. The freezing water temperature sure indicates our proximity to the pack ice and icebergs that fill the Weddell Sea. There, a clockwise oceanic current, known as the Weddell Sea Gyre, running along its coasts drives the cold water and the drifting ice next to the Eastern coasts of Antarctic Peninsula and from there on a NE-ly direction, often embracing
South Orkney Islands and adjacent waters. Following our course straight towards the South while sailing the strong winds at a good speed, over waters at below zero temperatures, we feel uneasy about soon running soon into those pack ice and iceberg waters during the few dark hours of the night. On top of that, the forecasted SW-ly winds that would allow us to sail on a NW-ly direction seem to be delayed or not adjusted to the reality of the W-ly winds we are experiencing. And indeed, before midnight several bergy bits and growlers started popping up amongst the breaking waves, this, together with the dimming light of the late hours of the day, made particularly difficult to properly spot them. In the horizon icebergs show up, menacing our way south during the night. In more than 30kn of wind, Europa sails straight into all this at about 7kn, but soon it is decided to wear the ship and turn around. Hands are called on deck to give a hand bracing all the way around sharp on port tack, not before clewing up the courses, taking away the spanker and dekzwabber. Once the ship pass the stern through the wind and heads North, all those sails are set again.
The distance covered during the last 24h, and before turning around has been 128nm, meaning that in the evening we find ourselves 175nm in almost a straight line East of South Orkney Islands.