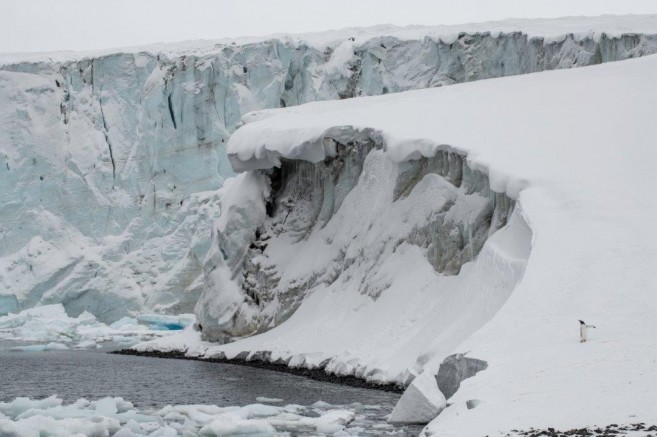 Last night we spent at anchor – the first one since we left Ushuaia. But in the early morning, drifting ice carried by the strong current that characterises the Antarctic Sound waters started to surround the ship. Time to heave anchor and drift around the area till we leave by lunchtime. After breakfast we are ready for a landing at Esperanza Base – but the Station is not ready for us yet – after yesterday’s several mails and radio contacts, we are expected to come around 10:00h. While waiting some of us climb the mast, to have a good look at our icy surroundings. About half an hour before the appointed time, the guides start heading for the landing site – as there is quite some ice close to the shore and it is not quite sure yet if we can make it. The army and navy personnel in charge of the Station looked quite surprised to see us ashore, as they estimated too much ice along the coast to work with the zodiacs. Nevertheless, finding a good lead through the brash ice and stranded icebergs, soon we get the word to get ourselves ready for the Station visit. Esperanza – Spanish for Hope, (after Hope Bay), was started in 1953 and from the beginning had the base motto 'Permanencia, acto de sacrificio'.
Permanence, and act of sacrifice – the motto might very well describe the reason why the base was started. A permanent presence on the continent itself was one of the main reasons, and a way of claiming a piece of Antarctica. It is here that the first baby on Antarctica was born. Silvia Morella de Palma, wife of the head of the Argentine army detachment at the base, was seven months pregnant when she was flown to Antarctica to complete her pregnancy and give birth to the first real “Antarctican”. The baby, Emilio Marcos Palma, was born in January 1978 and was automatically granted Argentine citizenship by the government since both his parents were Argentine citizens, and since he was born in a part of Antarctica that Argentina already had claimed. The claim is hold by Argentina and overlaps with British and Chilean claims. They are just officially recognised by the Antarctic Treaty signed in 1959 as claims, but not as official areas with territorial rights or part of any country. Also the military presence in many of the Antarctic bases, including Esperanza, is just allowed under one of the main principles of the Treaty, that Antarctica is a continent dedicated to peace and science. So they are just allowed to be here as logistics for the scientists and to maintain the Stations. Several more children were born at the base during the years to come, and even though Antarctica did not became more Argentinian because of that – it does give the base a certain civilian status, different from the purely scientific or military bases. After making our way through the ice we are welcomed at the rocky beach
by the two doctors and the chief of logistical operations – who will guide us through the settlement. One of our first stops is a historical
monument. Behind a fence, and probably restored every now and then, we find ourselves looking at the small stone hut were three man of the Nordenskjöld expedition wintered over a century ago. It is hard to imagine that these rocks have given shelter throughout a whole, dark Antarctic winter, but we know they did. And we also know, just as the doctor tells us, that they were rescued by Argentina using the corvette “Uruguay”. The rest of the morning we spent at the station – in the small museum, the church, the school, and finally the famous canteen or as they call it “casino”. Which, in the end is not a place of gambling and alcohol, but one of sweet coffee and stamps. The way back to the ship is a beautiful cruise through the ice – the configuration very different from this morning. That ice conditions can change fast – that is something we will learn much more about later today. Several of our crew members payed a visit ashore, also many of the people staying in the base came on board the Europa, delighted, though astonished, to see a ship like ours in these treacherous waters. By lunchtime we were all back on board and the last zodiacs shuttling them ashore returned to the ship, all was ready to keep on our way deeper South into the Antarctic Sound. Over lunchtime Europa steered between the ice floes for 9nm until she was positioned close to the drift-ice covered shores of Brown Bluff. This spectacular 720m high headland, with the orange colours that give it its name, dominates the landscape here. Down at sea, difficult steering to keep the ship in position against the current and threatened by the rapidly drifting ice, makes for a few moments of hesitation before our guides decide that would be possible to land. While a sharp lookout from our Captain Janke is maintained over the wind, icy seas and currents, the rubber boats take us ashore
manoeuvring through a changeable environment of wandering ice floes and icebergs. Once on land, not much time passed until she called us back on board. A large filed of sea-ice mixed with growlers and icebergs was being pushed against the Brown Bluff coast, with the danger of trapping us ashore or the zodiacs while making their way. But nevertheless we enjoyed the time on land over the basaltic rocks of the landingsite, under the everpresent look of the bluff itself. The dark massive boulders and rocks next to where we could put the boats at the beach show profusion of scars. Those have been produced by the glacier ice and pebbles that covered them until recently, scrapping them as they move back and forth, during the last years showing increasing amount of retrieving.

That large rusty coloured cliff is a remnant of an “englacial volcano”, a volcano that erupted mainly underneath an ice cap. Its odd-shaped vertical walls are made up of well-layered volcanic tuff. The yellowish color of the volcanic ash results from chemical weathering they have undergone. The clay that forms is called palagonite, another clue that this material probably formed under the ice. With time enough to have a look at the large glacier that calves in the waters of the bay, we head towards the large beach at the northern side
of the landing. There countless Gentoo penguins nest, sharing the space available with an Adelie Penguin colony. We could set foot on that beach before we were called back on board, from there multitude of penguins seem to hang around the peculiar shaped large boulders scattered all around. Those have rolled down from the cliffs are due mainly to wind erosion. The strong winds in this area literally sand blast the boulders to create these forms. They are called “ventifacts”, a fancy word for “wind made”.  There are also some hard lavas present in this pile of volcanic material. There are places with chunks of vesicular basalt: a hard lava with many holes in it produced by gas bubbles from which the glass later escaped, leaving the cavities behind. There are many fragments of this vesicular lava embedded within the volcanic breccias and ash layers seen in the large ventifacts. A few of the Adelie penguins that are still around the rookery look for shelter around them while moulting. Some youngsters walk the beach in company of the more social Gentoos, that still are present here in higher numbers. Many of the Adelies already abandoned the area to head for the sea and the icefloes that gradually will fill up all the area, and eventually the whole all the Weddell Sea during winter. Back on board after an exciting zodiac ride amongst the moving ice, we leave Brown Bluff volcanic area behind, and head southwards. We have already visited another volcano during our trip, Deception Island, but being still active is a much younger formation that Brown Bluff. However the age of James Ross Island Volcanic Group (to which Brown Bluff belongs), span through the last 20 million of years, still the youngest rocks in Antarctica.
After the afternoon activity on such an interesting and beautiful area, Europa heads straight along Fridtjof Sound to the Weddell Sea mouth. This Sound is about 6nm long and from its discovery by Nordenksjold expedition 1901-04, is famous for the strong currents swishing through it, together with its beauty and usually iceberg filled waters. And actually, we had all of it for the next couple of hours. Steering against the current Europa slowly progresses zigzagging amongst large tabular icebergs, trying to avoid at the same time the numerous growlers, bergy bits and sheets of sea-ice. At our Starboard side we leave the glacier fronts of the mainland, on Port the beautiful Andersson and Jonassen Islands. First passing Jonassen, the smaller of both with just 2.5nm in length and separated from the larger Andersson by a 0.5nm wide channel, clogged by ice. The name of the first one commemorates Ole Jonassen, who accompanied Nordenskjöld on his two principal sledge journeys in 1902-03. The second is called after Dr Johan Gunnar Andersson the Swedish geologist on the same expedition. Without great difficulties for our Captain and her Mates, but neither being an easy job, soon we find ourselves at the southern side of this channel, being welcomed by the moderately ice clear waters of the Weddell Sea. The large Erebus and Terror Gulf opens in front of us. Here we plan to spend the day of tomorrow, trying to penetrate its challenging waters southbound. Such an eye-catching name refers to the vessels HMS Erebus and HMS Terror used by James Ross in his Antarctic exploratory trips, between 1839 and 1843. Most famous are his discoveries of the Ross Sea and Ross Ice Shelf (that they sailed along its ice cliffs for 250nm), Victoria Land and the volcanoes also named after the two expedition vessels. Next year they sailed the area where we find ourselves now, discovering the island named in his honour, James Ross Island, which we will have a closer look at tomorrow, Snowhill and Seymour Islands.