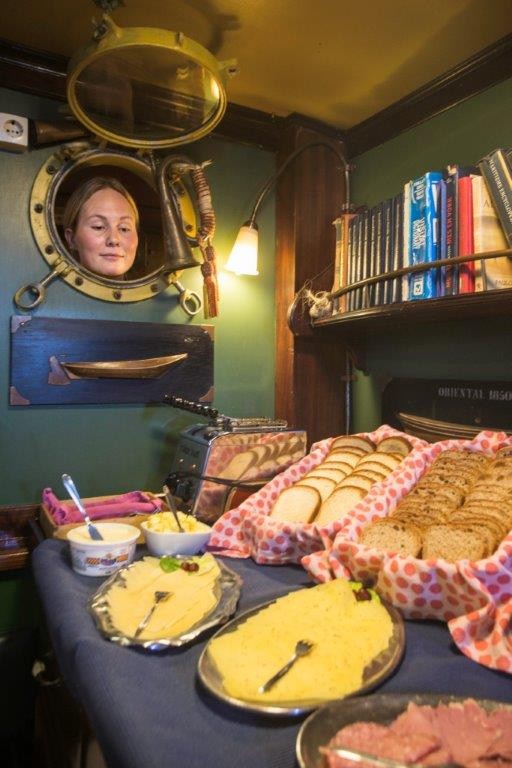 In Ye Olden Days it was mainly men who went out to sea... they bid farewell to the females of the species and headed into the watery unknown. The woman would have been left behind to do the daily domestic drudgery, or possibly raise a brood of hungry kids. Sure there may have been wealthier sailors whose wives had maids to do the work. These women would be deserted by their males for months or even years, and they would often have no idea as to where they had headed, whether they had died at sea, or whether they would return richer or poorer, and still be interested in the wife from a previous life. I am sure there would have been adventurous ladies who wanted to go too, but this would not be allowed. If I had access to Google on the ship I would like to learn more about woman of the past generations traveling the high seas.. (other than my Hollywood-style knowledge gained from watching Pirates of the Caribbean.)

So turn the clock forward a couple of centuries and here on the Bark Europa Crew we have six female crew out of seventeen... that’s a bit more than a third but still a progressive percentage. Our crew ladies (if they don’t mind being called that) are an inspirational international multilingual group of people. After more than three weeks at sea I am still amazed at their multitude of skills. Watching young Mille and Natalie climb the tall masts and sort out the sails in a howling cold wind is a sight to behold. A special moment for
me was watching Mille giving orders to a row of strong men (most of whom I suspect spend their professional lives off shore giving directions to others). I have also observed Natalie mending the wounded sails with precision. In the galley we have the cheerful Sasha who greets everyone personally as she dishes out another tasty meal, never a minute late... She moves around the rocking ship like a graceful ballerina while us mere mortals hang on like hippopotamuses. Upstairs in the deckhouse we have energetic Merel the multitasker who ensures that all the guests are comfy and adequately supplied with cookies, drinks, chocolates, music, clean towels, souvenirs and sympathy when we are unwell. And of course we have our two female guides Sarah and Nilla who both have an adventurous spirit combined with a vast knowledge of the areas we are visiting. Their respect for the natural environment as well as
excitement when seeing glaciers and icebergs is heartwarming. One realises that other than physical strength there are lots of other
qualities required of any sailor at sea including awareness, intelligence, empathy, dexterity, self-confidence and resilience. These
are the qualities which should be instilled in young girls rather than leaving their development to clever marketing gurus who make them think that being thin or made-up prettily will make them happy. Our Bark Europa Wonderwomen are exceptional role models as to what women are capable of if given a chance to expand our horizons beyond traditional roles.