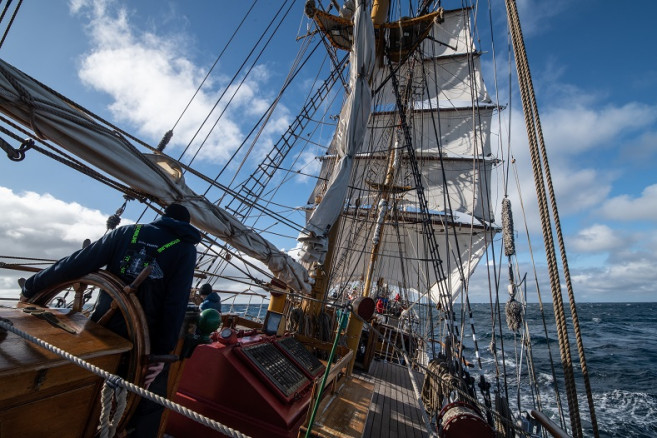 20th of March, the end of the Austral Summer.
At about 13:30h Europa sails past the latitude where the sun appears to leave the Southern Hemisphere and cross the celestial equator, heading northward as seen from Earth.

It happened to be today, for us on a sunny Sunday aboard a small Tall Ship, with a relatively small crew that sails from the ends of the earth to remote islands before returning to the shores of more known continental coasts.

As companions, countless seabird species. Some of them inhabiting the distant lands, others fellow travel colleagues for the different chapters on Europa’s voyages in both hemispheres. Along and north of the Antarctic Convergence Area in the Atlantic, Great shearwaters show up now and then. Increasing numbers come along as we approach their breeding grounds at Tristan da Cunha archipelago and Gough Island. But once their offspring are raised, Great shearwaters spread all over the Atlantic Ocean, reaching from the southern shores of Greenland to Northern Europe latitudes. There they can meet again the Old Lady Europa on her Tall Ship Races, her days at the North Sea area, or crossing again the Ocean on the way South for the forthcoming season.

For both, the sea becomes a symbol of migration and movement and wandering, a world of a kind unlike most of the land societies. Driven by the wits of Poseidon and Eolus, stirring its waters in brutal ways, or in days like today offering a change of mood and blow a fair breeze over abating seas and clear skies.
Fairweather to allow other seabirds to rejoice in the good winds flying along with us during the day. Manx and Little Shearwaters pay us short visits, but without doubt, the large flocks of Thick billed and Antarctic prions, the elegant soar of the Sooty, and the majesty of the Wandering albatrosses caught most of our attention. Spectacled petrels make their stellar appearance too, a very characteristic bird of those areas, suited in black and with their conspicuous white markings on their face, bearing a resemblance to wearing glasses.

Their population is restricted exclusively to one of the Tristan archipelago islands, Inaccessible. Similar to the more spread White-chinned petrels and considered until recently as one of the variations of this species, nowadays it got the status of endemism on its own. A representative case, a wonderful insight on how the planet structures the possibility for life, for movement, migration, followed by isolation of populations, speciation, and evolution of the living beings.

Feathered friends that fly and glide and wander over the seas making good use of the winds flowing over its surface. Today, autumn equinoctial day, we all seem to be lucky enough to take advantage of the SSW-ly wind of 20kn starting at dawn. Attractive conditions for all those seabirds flying close enough to their homes, giving us the chance too for spreading our canvas and sail once more.
Braces are pulled squarer to Broad Reach and the engines are switched off.

Clouds scattered away, the sun starts peering through them announcing a day of good meteorological conditions. A wonderful Sunday to take one back to the old classic sailing times, when the time was given to the crews to combine the sailing jobs aboard with more worldly tasks, such as reading a book, shifting clothes, washing the dirty ones if there was the chance, and needle and thread in hand, mend them.

Today, with her canvas shining in the sunlight, Europa sure enjoys again having enough wind to fill up her square sails, though her hull still rolls and lurch on the large swell, that now and then climbs over her rails washing her main deck.

Another excellent piece for us! Thanks!