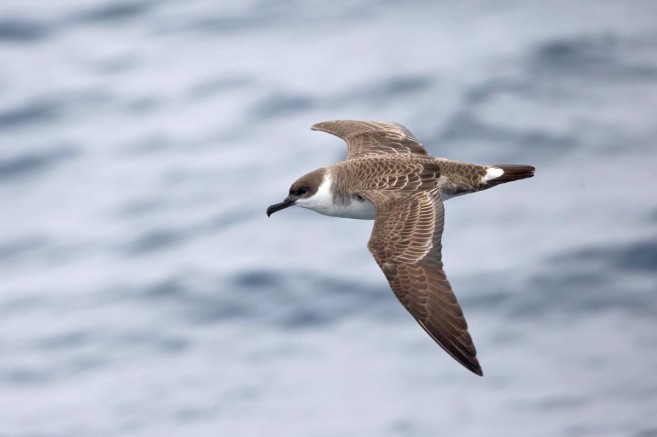 So far being lucky after the new fresh start. Even though if the 40º’s greeted us with fair winds and following seas, clear skies and a gorgeous full moon, last night around 01:00h they gave a warning of how they can be. A sudden wind shift of 60º made Port watch to take away all uppermost sails in a hurry, just to come back again to the N-ly direction and with Force similar like a while before, like nothing had happened. All sails were hoisted again and we kept this configuration for the whole day, with stable wind around 20 knots from the N-ly direction, just a bit a few degrees variable. Those good conditions offered a good chance to repair the sails that still have to be re-stitched, the Fore Skysail that was un-bent yesterday and a Fore Top Gallant that we have as spare but also in need of some care. The sewing machine was brought on deck and Matt spend the afternoon repairing the sails. By dinner time the Skysail was bent on again and ready to be set.

With winds predominantly from the aft and with all our canvas set, the good steering plays a very important paper on the navigation. Coming up in the wind can result on an increase of speed (in the wrong direction) and quickly having to take sails away, reason why Klaas and Gijs have been constantly checking our abilities on the wheel. In the past just a few selected sailors where allowed to steer the ships, especially in delicate or heavy weather conditions. Not everybody could respond properly on the helm, so it was a privilege to be able to do it and be in-between the group of seaman selected for this important task. Today we entered Patagonia, crossing the 42º S latitude, leaving Peninsula Valdés 140 nm on our Starboard side. Peninsula Valdés, with its main city Puerto Madryn, and picturesque town of Piramides, is a touristic centre of the Argentinean Northern Patagonia. Hundreds of Southern Right whales are using these coastal waters during their breeding season, together with thousands of Elephant seals, South American fur seals and Sea lions. Also its home of the largest Magellanic Penguin colony in the world, so it has not been a big surprise to spot some of them today as we sail southwards on those waters.

We are again on the go, and its time to start checking again Schouten and Le Maire logs. Yesterday we were 30 nm behind them. Their next position logged will be in a couple of days… 400 years ago. Instead of heading straight South, they went to Port Desire (Puerto Deseado), named after Cavendish ship, which visited the area before the Hoorn and the Eendracht. Sure catching up with them as we have been sailing at a good speed, doing 166 nm during the last 24 hours, giving an average of 6.9 kn, on a 215º course.

After coffee time in the afternoon, our fellow traveller Chris gave his talk “A History of Sea Shanties”, songs with alternating solo and chorus of a kind originally sung by sailors while performing physical labour together. He combined the history of their origin and the history behind some of the stories that they tell.

As we entered Patagonian waters a couple of new species of birds have spotted, besides the penguins already mentioned, a couple of Great shearwaters were flying around and also a flock of Sooty shearwaters was spotted. The first ones surprisingly just breed at Tristan da Cunha archipelago and Gough Island, but they spread northwards all over Atlantic waters on their migrations, crossing the Equator and ever reaching latitudes around 66º N. The Sooty shearwaters is a gregarious species, so often they are seen in big flocks like the one we spotted today. It is a Sub Antarctic island breeder, but also their migrations can reach high latitudes in the Pacific and the Atlantic as well.

Seagulls were visiting us too, and a Kelp gull even tried to land in our poor deck, without much success. Regarding the tubenose family of seabirds, we also saw Cape and Giant petrels and Black browed albatrosses, we are reached Patagonia and their breeding latitudes, so not just this species of albatross but others will become more frequent from now on. The South American terns that we could see yesterday around the ship and stopping on the Studding sail boom, they were still there today, the youngster an the adult seem that are using the Europa as a resting spot and a lookout point for their fishing. We can see cleaning themselves and flying from there, sometimes shooting in the water and coming back with some yummy treat.