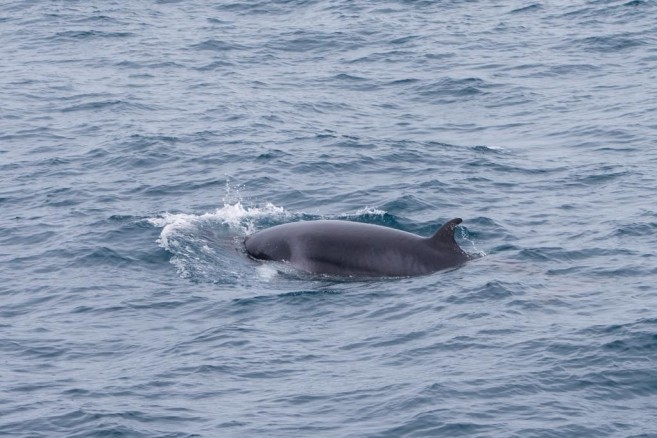 Reaching Texel latitude, where the whole trip started, but now in the Southern Hemisphere. Wildlife around the ship.

Not much sail handling

Calm and still conditions during last night, that looked everlasting, but we had a little break on them with a squall warning, that we could see approaching on the radar. Precautions were taken and some canvas was taken away and furled. But again the squall left behind a bit of drizzle and a light wind shift, so afterwards the canvas was set again, sailing close hauled on Starboard tack, on a Southerly course. As the sun rises a small group of Peale’s dolphins spend a couple of hours around the ship, leaving us when the wind starts to pick up and we actually start moving a bit faster. Until lunchtime we sail in that fashion Southwards, but again a sudden and short period of instability made us busy on deck, but soon wind stabilises and the same conditions remain for the rest of the afternoon, so not much sail handling is needed, as all canvas is set and the conditions remain steady.The crew again take the advantage of having this time for doing some maintenance and repairs aloft and in the Bowsprit.

But things changed in the evening, while having dinner the wind unexpectedly picks from the West, a good opportunity to advance faster, as the Europa feels happy finally speeding up to 7.5 knots straight towards the South. But those conditions didn’t last long; they were just the announcement for a larger weather change. Suddenly there is a quick wind shift, backing to the East and dying down. Right time to wear ship, and just after dinner Port watch and voyage crew took no time in performing the manoeuvre. Soon we sail on Port tack Southwards at 5 knots.

During the night the weather conditions become unstable, squalls and rain appear in the radar and soon they embrace us. Better to prepare ourselves, taking away some canvas. But soon the conditions show themselves as not so bad and sails are set again. Rain falls over the decks, steering men and lookouts, while the wind drops.

Tonight we sail between the latitudes of 52º and 53º S. These latitudes remind us about something: having a look back at September, on the 8th of that month the Europa began the commemorative trip of the discovery of Cape Horn just at the roadstead of the Island Texel at a latitude of 52º 59’N. The voyage for the voyage crew started in the picturesque town of Hoorn, they embarked on smaller typical Dutch vessels, which brought them to the Bark Europa. Just as the big ships did in the old days, the Bark Europa was anchored at Texel.From then we sailed a long way to reach similar latitude on the Southern Hemisphere, almost took us 3 months, and now we are pretty close to Cape Horn and the end of this new adventure for the Bark Europa and her people. But for the Europa, the end of a passage means the beginning of a new one, once we reach Punta Arenas.

Wildlife keeps showing up around us on our way South. This is ending up being a great trip for bird and Marine mammal watching! The most special sighting today was a Dwarf Minke whale hanging around for a while. Unlike the other species of Minke whale in the Southern hemisphere (Antarctic Minke whale) those have a very clear white flipper patch, often extending to the shoulders. They have a circumpolar distribution just occurring on the Southern Hemisphere, normally above 60ºS, but lately more and more sightings are recorded all the way to 65º S in Antarctic waters. Maybe an indication of Climate change and warming of the surface waters around Antarctica?

Another species that is a first for the trip, but we will most probably see many more of them from now on, is the South American Fur seal. A lonely individual followed us jumping in and out of the water for a few minutes. Those seals have a pointed snout if we compare it with the Sea lions, with longer and slender flippers. As in the former species, males are bigger and more robust than females. And at the moment they are also still defending their territories and harems ashore, so mostly what we can see now in the ocean are females. Sea lions also visited us today, showing their curiosity checking us in small groups during the length of the day.

Also a new species of penguin for the trip could be briefly seen today, a small group of what looked like immature Rockhopper penguins showed up for a couple of minutes at our starboard side. Being smaller and with brown-orange bill could be distinguished from the Magellanic penguins that also approached us today. The rockhoppers have a circumpolar distribution in the sub Antarctic zone, the closest breeding colonies are not too far from where we are sailing, being at islands off Cape Horn and Falklands.

The yet usual but great Wandering, Royal and Black browed albatrosses were around as well, together with Giant and White chinned petrels.