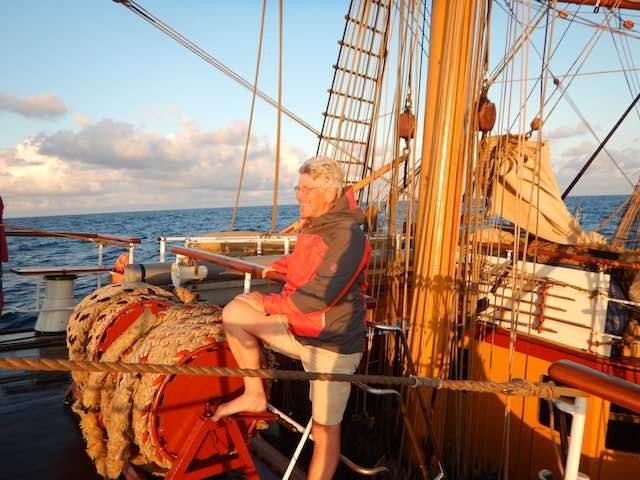 After steaming for 24 hours on a Southern course, the early morning of
the 7th we set full sail, switched of the engines, and changed our
heading to the East. During almost 48 hours we sailed close hauled on
courses varying from 90 to 120 degrees. Starting with a smooth 4
Beaufort, the wind increased up to a 6 to 7 later. The courses,
topgallants, royals and gaff topsail were taken away. With the ship in
motion this was a nice balance training. The waves picked up, but now
everybody was so used to the motion that nobody got seasick anymore.
With the speed sometimes exceeding 8 knots we made good progress.

Yesterday afternoon the wind started to decrease as did the ships speed.
The voyage crew went aloft to do their first unfurling at sea. This was
quite exciting and all smiling faces came down after the job done. With
almost all sails up again we could maintain the speed and course for a
while longer. With the sun shining bright the outside temperature rose
already to 28 degrees Celsius. After dinner the wind died out and
shifted to the SE / SSE. The speed dropped and the course over ground
changed to 70 degrees. Since we have a whole lot more miles to go we
started the engines, took the sails away and now we're on a SE'ly course
in search for the predicted easterly winds.

This morning we did not only get greeted by the rising sun, also a
couple of dolphins accompanied us for a while. It's promising to be
another beautiful day at the Atlantic.