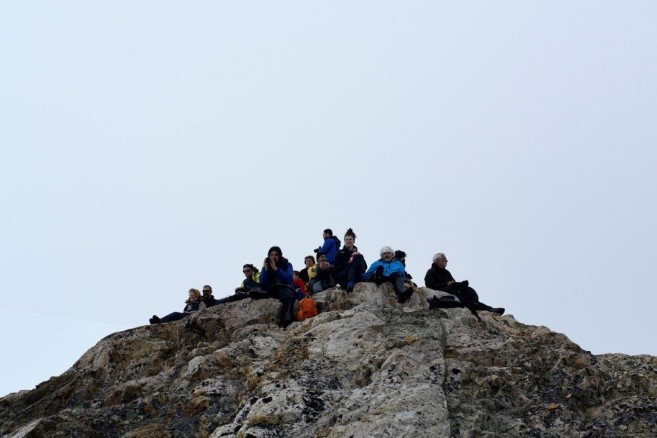 It started off as a calm morning. Being on deck we could see the iced mountain tops surrounding us. The sea was almost flat. Completely different from the day before, when it was snowing and we could hardly see a thing. But as we stood there, wind was slowly picking up. When we reached our first destination of the day, a shipwreck in Foyn harbour, it was blowing around 30 knots. We were getting ready to get into the zodiacs for a cruise. By the time we were done with our preparations, wind reached over 40 knots and we had to cancel it. Luckily, we had a nice cruise on the Europa with many ice-blocks filling up the Antarctic waters we were going through.

As we came closer to the Antarctic Peninsula, luck was on our side as the weather was turning out to be beautiful. When Orne harbour was in sight, the sea was as calm as a flat lake, the sun was shining and there wasn't much wind. We are really excited to step foot on the real Antarctic continent. The small bay we encountered is lined by steep mountains covered in snow and lots of glaciers. We maneuver the zodiac through the ice closer to a small rocky beach as a landing sight. And there we go! We made it! We survived the Drake shake and now we have our twinkling eyes. Our first footsteps on the mainland.

We were told to dress for a hike but little did we know. We were climbing a steep mountain with a thick layer of snow to hide it. Sun was making it glittering. As we zigzagged uphill temperature was rising and you could almost see steam coming from our bodies. People were coaching each other to the top and many layers of clothes were taken down. The reward for this long climb was a clear and stunning view over the whole Gerlache Strait and the islands called Anvers and Brabant. Before we started with this hike, Colette shared the story about the Belgian expedition to this area, the Belgica. Looking over the Strait, we were even more impressed that they made it out alive.

Next to that there was a colony of Gentoo penguins feeding their chicks and keeping an eye on this human beings with bright colorful sailing jackets.In the middle of this group of penguins there was one penguin on a rock. He slowly started moving his wings and then all the penguins around him started to make a lot of noise. It was like a scene from the movie ‘Sister Act’ in which the choir was being conducted by Whoopi Goldberg for the first time. After a few quiet moments on top of the hill, watching the penguins shuffling over the penguin highway and building a nest with small rocks, we went down. Going down was a lot easier than going up and we quickly got back to Europa.

This was a very memorable moment. We would almost say this was a once in a lifetime amazing moment, but the following days, many more of these great moments would follow. We are so lucky to be here.