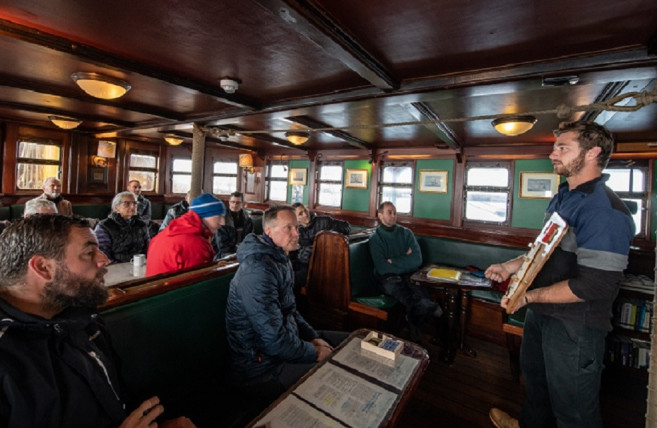 Life at sea on an oceanic passage for days in a row represents a big change on what most people is used on their daily lives on land. The goal of sailing the ship from one destination to another, often over rough waters and changeable winds (as we do towards some of the remotest places on earth), requires a set of duties to be conducted day and night, which probably will go beyond the image of the sailor’s life that many people have. Setting and trimming sails and yards is just part of it, but the cleaning, scrubbing, teaching, learning and sail training process, and the ongoing maintenance procedures are a set of activities to be conducted from casting off lines from safe harbour until the same is done from the next one.
Rigging, ropes and sails that will withstand the rigours of the cold southern oceans must be checked, adjusted to the different climate areas where the ship sails, maybe changed, repaired and mended whenever necessary.
The ship’s compliment gradually have to get used to the life at sea, both voyage and permanent crew. On this occasion, the gradual start of the trip with the slow build-up of wind changes and sea conditions helped indeed to set course on our journey from Puerto Madryn to South Georgia.
A sunny morning came together with fresh temperatures, while the good breeze backs steadily from a Northeastery to a Northerly direction, easing down from 20 to 14kn. Braces are pulled to set them squarer and the courses clews are stretched with their whisker poles to catch more of the following wind while keeping a 130º course. On those conditions Royals are set again too. A setup we will probably maintain for a while until the next weather changes, with strong Southerly blows forecasted to hit us soon.
A good 160 nautical miles have been done during the last 24 hours, mostly all of them while enjoying a nice sailing experience. Enough of a distance to find ourselves sailing over the deep ocean, leaving behind the extensive and shallower continental shelf off the Argentinean coasts.
Here, some of the Southern right whales that had been breeding in Peninsula Valdés and the Europa join tracks on their way towards areas further South close to South Georgia. Occasionally their blows are spotted at the distance. Giant petrels and Black browed albatrosses soar over the slight seas close the ship, Prions show up with their fast and undulating flight pattern, and the watchful eyes on deck have the firsts sightings of the mighty Wandering albatrosses.