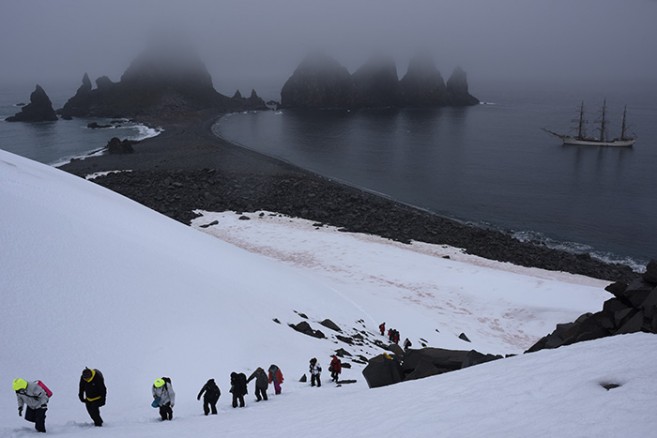 Early in the morning we leave for Fort Point. Fort Point is a narrow isthmus at the Southern end of Greenwhich Island. It is a little foggy and slightly humid, as so often in the South Shetlands. The landing site is quite steep and there is enough swell to potentially flood the zodiac. Matthew and Sarah are dressed in drysuits – to hold the zodiacs while everyone is getting out. Or is it to be able to float around and have a closer look at the penguins? Certain is that the amount of jumping penguins increases drastically when they are floating while waiting for the next zodiac. Once everyone is on land we take some time to explore the rocky land spit. To watch the Gentoo and Chinstrap penguins and their chicks – and find a single macaroni between them. The other side of the narrow bit of land is ending into a high and in this weather remarkably blue glacier front. The waves in the ice filled sea splash against the larger bits of the glacier.

From the glacier front we climb up through the snow to reach the nunatak – the black rock sticking out of the glacier, around which the ice has melted. We climb for a while before we stop and sit down; we have a splendid view out over the land, the fog and the Europa anchored below us. The top of the rocks that gave name to this place – the rocks standing out in the ocean like a castle, a fort – are partly covered in fog. Large patches of the snow beneath us are covered by green and red algae – strangely colourful in the otherwise monochrome landscape.

Arriving to Hannah Point – most of us decide to come out on the evening walk as well. The landing site is packed with mostly Gentoo penguins. Parents and chicks almost the size of their parents walk around in all directions. We know we will be divided into smaller groups and stay close together, and we know this sight has been closed until just a few days ago exactly because of all the nesting penguins, but still it is impressive, almost intimidating to be so close to the nests and the adults with their big chicks. It has been drizzling for a while now, and all of them look muddy and wet. After walking extremely careful for a while, we come into a more open area and continue our walk between the penguins. Even after just a few days out on the open ocean and in the pale landscape, the place seems intensely green – Prasiola Crispa is flourishing higher up on the hills. From Hannah Point we walk to Walkers Bay – passing an enormous pile off Elephant seals, and than leaving the busy and crowded area behind us we enter a black landscape of volcanic rocks and ashes. The only colour here are the strong greens of the Jasper stones, small and larger rocks spread out over a 30-40 meter area. We walk past young elephant bulls fighting or practicing to fight.

After the narrow path opens up into a broader beach. Under an enormous rock a small collection of fossils can be found – apparently collected by a group of scientists that installed them their as a museum like display – for those who know. The fossils of plants and leaves tell stories of different times, a time that the continent was still on another latitude, part of the ancient super continent Gondwanaland. It broke up a 180 million years ago, after which the land that would become the Antarctic started drifting South. Fossils found in Antarctica were in fact the basis for the theory of continental drift.

It is starting to get dark again, and time to get back. Compared to our rough landing yesterday – this landing is out of limits. Better to call yesterdays landing calm. It is a long and wet way back, but the ship is warm and the bar is well stocked.