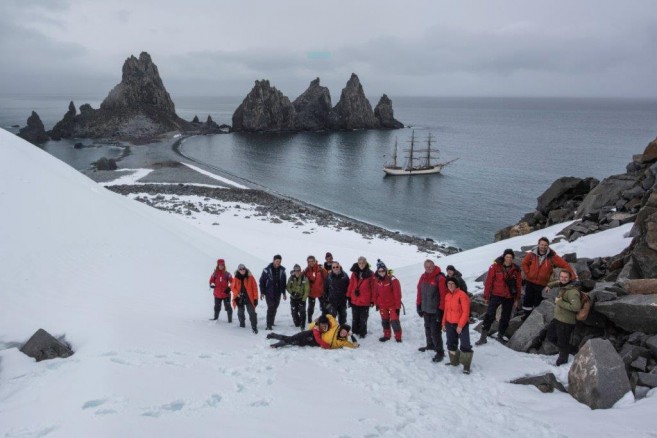 As a big difference with yesterday’s night fierce windy conditions along the southeastern coasts of South Shetland Islands, last night’s calm weather allowed for a calm transit between Deception Island and Greenwich Island. For 45 nm we motored our way on the gentle swell, just to arrive before breakfast at Fort Point. Its dramatic rocky point, leads along a narrow flat isthmus towards the glacier fronts of Greenwich Island. Open to the Bransfield Strait whimsical sea conditions and winds, is an exposed and rough place, often representing difficult landing circumstances. Due to these facts and adding the inadequate soundings and charts of the area, Fort Point is seldom visited, but is now becoming a traditional spot for bark Europa. North and South sides of the isthmus were scouted before taking a decision where to anchor and where could be the most suitable place for a landing. Depending on the wind situation and sea state, it is often possible to land here, in one or the other beach. Seeing our guides dressing in their dry suits gives us a good guess of the landing characteristics. Care must always be taken here due to the trains of waves breaking at the steep rocky shore, but the unique setting of the spot, spectacular views and the amount of wildlife is worth a wet disembarkation. Being a relatively small area, during the morning we had time enough to soak into the wild beauty of the spot. The glaciers covering Greenwich Island here reach the sea level, and between two of their fronts stretches a boulder beach out towards the ocean, crowned at its end by high jagged basaltic cliffs. At their feet and along the flat accessible areas of the narrow stretch of land, thousands of Chinstrap and Gentoo penguins find their nesting grounds. Amongst them, usually a Macaroni penguin couple hangs around. Today it took to the very end of our time ashore to distinguish one walking amongst the numerous Chinstraps. This species is observed seldom in Antarctica, and as we know from our days at South Georgia, the Macaroni is in fact a South Georgia species. Once we all got a good look at the only Chinstrap penguin colony that we visited during the trip, it was time to spread out a bit more, first walking along the cobble spit towards the imposing glacier fronts that frame the isthmus. The sight is quite impressive, with a massive icy cliff next to us, battered from time to time by the large swell breaking at the narrow boulder beach beneath it, creating a spectacle of untamed beauty. For the ones seeking for a bit more morning adventure, our guides now walk towards another of the feature highlights of Fort Point, a “Nunatak” sticking out off the ice field that flows on either of its sides, and ends up with the two glacier fronts over the ocean that we just visited. The rocky mountain with nearly vertical cliffs on all its sides shows itself as an island amid the ice field. The dark rocks, once they get free of the ice covering them, get warmer than the surroundings and gradually melt a space between them and the ice, leaving room enough in-between for all of us to fit in. Perched above rocks and ice, the viewpoint is fantastic. From there we all admire the stunning raw scenery with its unique Antarctic appeal. Soon our last landfall in Antarctica was reaching its end and it was time to start getting back on board. Engines should start shortly after embarkation not to lose time to get into the Drake, en-route to Ushuaia. Like this, after a quick setup of the ship for open oceanic water sailing, there she goes once more. First motoring her way along the English Strait, leaving Greenwich Island at our Port side and Robert Island at our Starboard. A lonely Minke whale pays us a visit while Europa approaches the small Aitcho archipelago, that marks the Northern entrance to English Strait, and for us, the beginning of the infamous Drake Passage. We are welcomed to its waters with West-by-South fair winds and relatively low swell. The time that our beloved Europa was waiting for had come, and after the crew unfurl almost all our canvas and set it, she happily awakes once more, sailing at 8kn to a maximum speed of 10kn on a NW-ly course. Just the higher Staysails and the Gaff Topsail remain furled, but before diner, under slightly increasing winds over 30kn,
Royals are clued up and stowed away. We keep this configuration since then, having a great and fast sailing on a close-hauled point of sail, on port tack, just with slight course changes when the wind seems to veer and back a few degrees several times during the night.