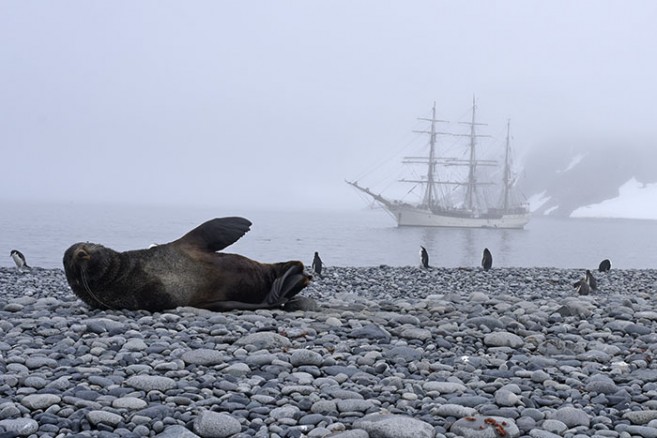 Today we visited Fort Point (of Greenwich Island?); and Hannah Point and Walker Bay on the same island. Fort Point was the highlight of my day, and possibly the trip so far. I think fur seal radio had been sending the message there are travelers
out there landing at those places that don’t get many visitors normally. We were met by the Fort Point Water Ballet, a synchronised and elegant water ballet troupe made up of both Chinstrap and Gentoo penguins. There were at least three pods of them in the harbour, approximately twenty per group. I could have done nothing else all day but watch them, their movement and co-ordination in the water was exquisite. On shore there was a fur seal that seemed to be the patriarch of the point. He moved slowly and was very long in the whiskers. I could imagine him speaking in a James Earl Jones voice “Welcome to my island travelers, I hope you enjoyed the ballet, the penguins have been training hard in hope and anticipation of your arrival. To the right is our castle – our Fort if you will, and to the left is our glacier. If I can be of any assistance please let me know. Just remember to walk in each others shoes.”
The castle or Fort was an imposing rock where we could see many penguins climbing and hopping as high as they could. The beach between the glacier and the Fort was pebbly, but what made it stunning was next to the stones were polished and rounded pieces of ice up one side of the shore. It was like someone had poured out the frosted glass stones out of their decorative vase and placed them on the shoreline, albeit much larger, like the size of a pillow each.
We then headed up the glacier. There was a lot of fresh snow, but the hill had an approximate incline of around 60 degrees. We walked up in single file, which then made sense to “walk in each others shoes” as advised by the grand fur seal. Firstly so we could follow the trail, but also to make sure we had sure footing and didn’t go rolling down the hill. It was a beautiful view from the top of the Point, with the Europa in the background. I know there are approximately fifty ships around but it really feels like we are on our own out here.
We finished the hike by sliding down the hill. There was a caterpillar of toboganners in the last group led by Seth of course. He also found some large rocks to lay on and pose. I’m sure the fur seals are a distant cousin of his. As we hopped back into the Zodiac towards the ship the water ballet gave their final performance. I could of watched for longer but we needed to go.
In the evening we landed at Hannah Point and walked to Walkers Bay. It is one of those places that is visited rather regularly, and whilst it had its own awe being a breeding ground for Chinstrap and Gentoo penguins, with two large colonies of Sea Lions, it didn’t seem to have the same magic as Fort Point in the morning. As we arrived there were a group of Gentoo, seeming to do a soul acapella routine whilst the group next to them were feeding their chicks. What seemed noticeable at this island as opposed to Fort Point, there seemed to be a Chinstrap/Gentoo apartheid. Chinstraps were nowhere near Gentoo rookeries, and the Gentoo that were near the Chinstrap rookeries all had their backs turned. It felt cold and class oriented. Or perhaps I’m reading too much into things. When you think of Antarctica, you think of icebergs, penguins, water, sea lions – volcanic ash is not one of the top things that would have come to mind. Once we walked through the rookeries at Hannah Point, the landscape changed significantly. It was powder, just not white, rather a dark charcoal. I felt that if the colour was changed to Iron Ore red it
would have felt like the Pilbara with the hills around and barreness of landscape. There were flecks of what seemed like red jasper in the soil, a few elephant seals and Gentoo on the beach amongst several bones of animals past. It was like we had visited two different islands when they were only a matter of metres away from each other. I’m actually quite excited about tomorrow, the plan is to head to Deception Point where we might have a chance to swim in volcanic waters. Can’t say that very often!