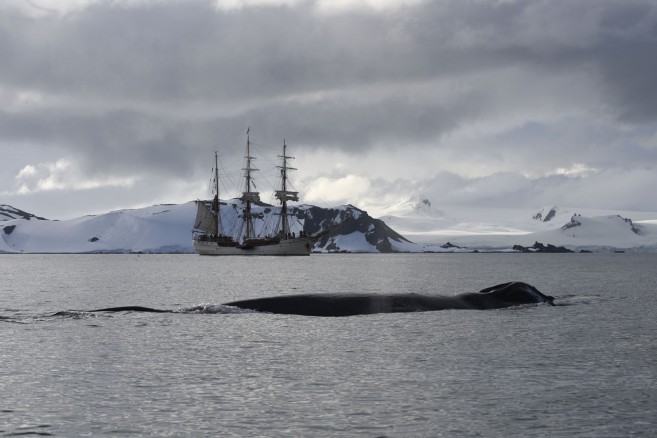 At the start of the day – for those who are in day watch that is – at the start of the day we arrive at Fort Point. We have sailed all night, under sail between 01 and 06, and the last part, when the wind dropped, on the engine. When we arrive the ocean is smooth, the sun is shining and there are many deep blue glacier fronts to be seen, contrasting strongly with the whiteness of the snow covered land and the dark black rocks. For sailing we might have wished for more wind, but for this day of landings it is quite perfect. The three bells ring already at 08:30 – bringing together the ones that have been awake for hours and can´t wait to get on shore, and the ones that actually were just on their way to breakfast. It´s a beautiful morning and we have many plans for this day, so we decide to start straight away.

The landing at Fort Point is overwhelming. When we set foot on land today we truly feel like being in the Antarctic. Someone remarks that it is great to be here, like a guest at this stony beach, home to the brreding gentoo and chinstrap penguins, a lonely macaroni and several elephant seals. It is a seldom visited place, a true Europa spot one could say. And what a spot! We land on an isthmus, which ends in large rocks, vertical cliffs that are the origin of the name of the place; Fort Point derives from Fort or earlier, Castle. In front of these rocks gentoos and chinstraps are sitting on their nest with chicks, some of which almost seem to big to cuddle up under their parents feathers. Most of them have 2 chicks, there is a lot of activity, and some of us stay in this spot during the whole landing.

Others decide to cross the isthmus and approach the glacier. A large, intense blue glacier front is ending in the ocean here. The side however has retreated up to the land, where it no longer calves, but slowly melts, which makes it save for us to come quite close. The shoreline is filled with brash ice, turning and rumbling in the swell that is significantly stronger at this side then at our landing beach. The snow covered side of the glacier is colored red and green by snow algae.

From here on we can hike through the snow up to the nunatak. This cliff is eroded by the islands glacier that was flowing around it. The heath that the dark rocks store from the sun has melted the ice around, and the nunatak is now standing like an island in the glacier. We can climb quite high up along the gap between the rocks and the ice. When we stop and turn around we have the most impressive view; we look out over the isthmus, sheltering Bark Europa on her anchorage, the sea still calm, and far behind we can even see the snow covered mountains of the Antarctic Peninsula. In this light they seem much closer then the 130 km they actually are away. We sit for a while, listening to the terns, simply enjoying the view, before we head back to the shore. There is so much to see on this landing site that none of us actually wants to go back. But we do, and continue enjoying from the ship. Very soon after heaving anchor, a whale is sighted.

Right after lunch we drop anchor in Yankee Harbour. The place is called after the American sealers that used to harvest fur seals her. Harvesting is quite an appropriate term; in their first season they got 10.000 skins in just 12 days. Now there is not a single fur seal to be seen – they are still further North on their breeding grounds, and will return later in the season. On Yankee Harbour there are a few off limit areas, but otherwise we can enjoy the place on our own. There is a long, rocky land spit on one side of the landing area, and a gentoo penguin colony on the other side. The land spit is almost 1 km long and creates a natural sheltered harbor. All around we can see, and every now and then hear the glacier fronts. Halfway our landing it starts snowing lightly, and though it does not get especially cold, the atmosphere changes completely. Around 17:30 we are all back on board, Blacky and Grey are on the hip, and we start heaving anchor again. Everyone is excited, so excited that Lex has to tell us his surprise a little earlier then planned. "No alcohol after 19:00 – we are planning an evening landing". And indeed, we are heading for Half Moon Island – another beautiful site not far away. Meanwhile, it has stopped snowing, and the intense early evening light reflects the landscape in many shades of blue and white.

Then – suddenly – things change. Just as dinner has started, we are called outside for whales. And not only to look, but also because this is the perfect chance for our guide and marine biologist Benji. With a crossbow and a modified arrow, he hopes to shoot whales and collect samples of their skin and fat. Through the skin he can find their DNA and define to which family the whale belongs, through their fat he can research their feeding habits, but also see how much of our polution like ddt, pbc, heavy metals and hormones they store in their body. Luckily Grey is on the hip and easily launched – in no time the team of driver Jarran, assistent Emma, photographer Sarah and Benji himself are in the zodiac. They follow the whales for quite a while; it is a female bowhead with her young. Since she is with here young, feeding close to the surface, she will not dive deep – which means that she only very rarely will show her fluke. And exactly the first thing they have to do is taking a photograph of the fluke, the fingerprint of the bowhead whale. By the time they are ready to shoot the whales surface less frequently – but in the end an excited Benjamin manages to get a sample. Everything could be clearly observed from the ship – the whole process has been followed closely. To see a zodiac with four people so close to the whales gives a different understanding of their actual size. Back on board they get an applause – even though this action means that we are too late to do our planned evening landing now. Here in Antarctica sites are closed between 22:00 and 04:00 – to give the wildlife a resting period. We still drop anchor close to Half Moon Island. Drinks, talks and the experiences of the day are enjoyed on deck. Later tonight we will heave anchor and start sailing towards Deception Island. But for now no one wants to be anywhere else then here; on board Bark Europa, on a calm and intensely beautiful evening in the Antarctic, one of those evenings it is simply impossible to go to sleep.