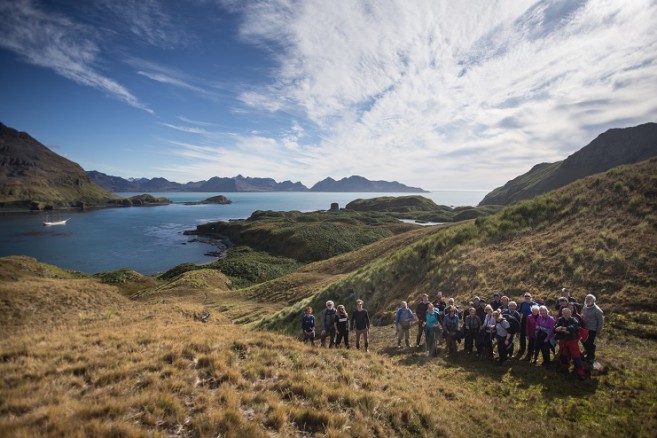 We woke up to a cloudy and rainy day. The heavy snowfall last night left behind a thick layer of snow over our decks, but as the morning hours pass, it slowly melted away while the crew, with the help of some of us, were brushing it away as well.

Europa spent last night slowly making her 25nm way to Fortuna Bay. Sails were unfurled and ready to be set, but the forecasted wind never showed up and she motors her way overnight. Once there in the early morning, it really didn’t look any promising for the activity that we were planning: the famous last bit of the Shackleton’s walk across the hills between Fortuna and Stromness Bays. Departure was delayed for an hour to check if the weather was stabilizing and the low cloud cover lifting a bit. And it happened indeed. By 09:00h the decision is taken to give it a try and go for it, even though the weather was not the best. After the first scout zodiac with our guides, soon we were all embarking the boats to go ashore. After struggling a bit with a couple of big male Fur seals, as it has been happening on all our landings, we were all ready to start the legendary hike. Besides them, South Georgia cormorants, Skuas, Giant petrels and Pipits are also spotted along the landing beach, wandering around amongst the stranded kelp rafts, Elephant seals and the grassy slopes nearby.

We were all happy to start our much anticipated Shackleton walk. From our landing site we looked to the other side of Fortuna bay, the place where Shackleton, Worsley and Crean came down after crossing South Georgia. They had managed to walk over the heavily glaciated interior of the island, but came down in an empty bay, where there was no whaling station to be found. Now they still had to cross the bay and manage to get to the next one. Even though we were all well rested, well fed and well watered, dressed in our wind and waterproof lightweight gear, we felt a certain connection by being at the same place. We started climbing up between the lush, green tussock grass – very different from the icy, snowy landscape they walked through in early May. The beginning was quite steep, and many layers of clothing had to be peeled off during our first climb.

The walk keps going through a rocky, barren landscape, every now and then looking back to see Europa sailing out of Fortuna Bay. The fog that we had nervously observed during the morning seemed to be lifting, and indeed the view would be very good during the whole walk. Before reaching Crean lake, we stopped to have a look at the landscape that almost functioned as a textbook about glaciers. We could clearly see were the König and Fortuna glaciers once had been, and how they shaped the landscape. After listening to Jordi explaining this processes, we continued to Crean lake.

It was here that Crean fell through the ice, and got even more cold wet and miserable then he already was. At the side of the lake we took time for some seedless, fruitless poultryless but nevertheless delicious lunch, before we continued towards Stromness Bay. It was not long before we came to the point where the tree men once stood, and listened to the sound of the steam whistle calling thewhalers to work. It was 17 months ago since they had heard a sound from the outside world. This sound meant that there were people, it meant that they would be save if they could reach it. They had to go a few more miles to reach Stromness. And so did we. We leisurely walked to the saddle between the two bays. Rested a bit and took some photos before we started our descend. Since an unfortunate accident happened here a few years ago, directions for descending this part are rather clear; we all followed the same line, and carefully went down the slope. Before we were completely down, Jordi made a sudden move to the right. From far he had seen a small Gentoo colony, and wanted to have a closer look.

We know that the Gentoo penguins in this bay always go quite far inland to built their nests. But this was the first time we saw them this far. They had all built nice nests of mainly grass – even though several seemed not entirely content and kept steeling building material from other nests. Some Gentoos were still laying on their eggs, many were already feeding their chicks. There was a beautiful sight with Stromness in the background, and it was hard to continue walking down.We came down at a steep waterfall, the Shackleton waterfall. We sat down for a bit, enjoying some chocolate, trying to imagine how different it had been for the tree exhausted man that came down here. They were surrounded by an icy white landscape, and when they ended up at the waterfall, they decided to go straight down. They did not have many things with them, but they did have some rope left. They attached their last bits, and lowered themselves down over the slippery, frozen waterfall. They made it to were we now were, and only had to walk the last part on to Stromness.

They had walked for almost 36 hours, after spending 16 days in a tiny boat on one of the roughest seas in the world, and living for 17 months on the ice. Our story was much different, but we had the same distance left, and started walking again. While we were walking, Europa had sailed around and now appeared in the bay. We reached Stromness station, the first manmade place we encountered since leaving Montevideo. We could not go in between the unstable, asbestos rich buildings, but even from a distance the remains gave a clear idea of the scale the whaling industry once had here on South Georgia. And Stromness was a rather small station. It only operated for about 20 years before it was turned into a shipyard for the nearby Leith station. After making our way through the fur seals, relatively calm on this particular beach, we were picked up by Blacky and Grey. Back on the ship we were welcomed by warm soup and freshly baked garlic bread. We ate quickly, hungry for food, but also already hungry for our next walk. oon three bells rang again to start preparing ourselves for this new hike, now from Stromness to Leith Harbour, where the largest whaling station on the island was located. After dealing with thick canopy of Giant kelp, the zodiacs finally could make it to the landing beach. Some of us remained on board for the short sail to Leith, with Lex to accompany us.

Thank you for such a wonderful description of a rare event. To walk in the footsteps of Shackleton, Wesley and Crean must be so humbling. Giants indeed.