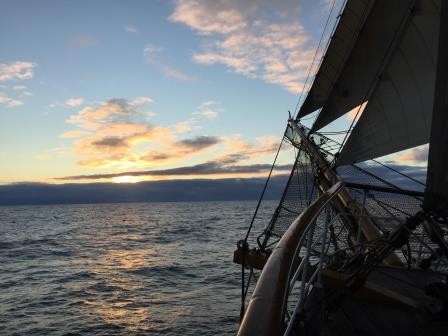 Low pressure areas like to chase each other. They come one after another right across our track from Bermuda to Boston. Captain lets the first and the second one pass. After the second one there is enough wind to proceed with a fair eight knots. The third low brings an impressive nightly increase of wind up to 35 knots. Our speed goes up to over 10 knots. One by one sails are taken away with the increasing of the wind, but still we are racing away with over 10 knots. With the wind also comes a long freshwater shower, lasting much longer than you are normally allowed on Europa. No seawater deckwash today, everything smelles fresh when the ship and its crew start drying again.