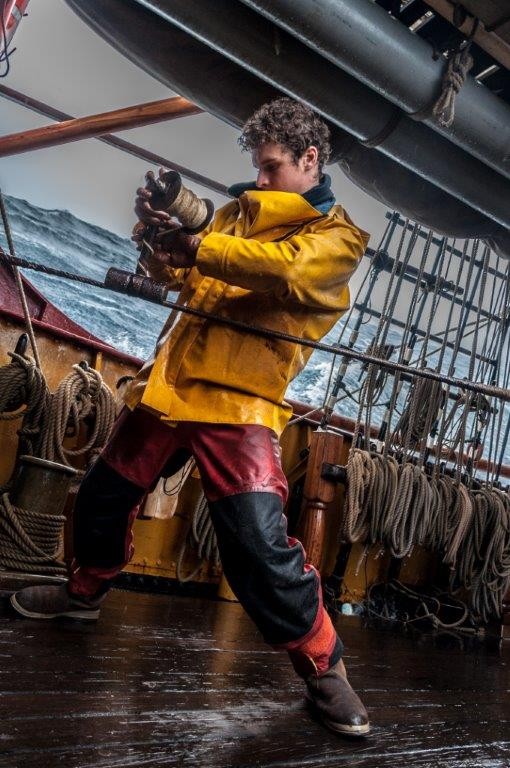 Frontal Passage. From Full-and-by to Downwind.

As expected, during last night the skies became overcast and some showers started to show up in the horizon. The High Pressure System that has been influencing the winds and weather during the last few days have overtaken us, and now we have to face conditions related with decreasing Barometric Pressure and a frontal system passing by.

Wind continue to blow from the NNW at about 25kn giving us sailing speeds of 8.5kn as we start heading on a course leading more on a ENE direction. Europa leaves behind the latitudes closer to Roaring Forties to get further north into the 30ºs.

In the morning a quite straight line could be seen running over the Radar, overtaking and passing us. The forecasted frontal passage carried warm air to start with, loaded with moisture, followed by colder conditions afterwards. All an all it left behind rain and wind, but calmer and drier conditions later on.

Like this, we got drizzle and rain for the whole morning, together with increasing winds, to the point of gusting 40kn. Still with the Top Gallants set, that was the moment to take them down and furl them. Foul weather gear replace T-shirts and shorts while working on deck once more.

Getting the ship ready to port and to undertake a couple of weeks of refitting, together with carrying on with some maintenance projects took part of the day whenever sailhandling allowed us, despite the rain and increasing seas. Blocks must be sanded, varnished and readied. There are stays to worm, parcel and serve. Damaged Halyards have to be replaced. All while with reduced sail Europa faces the rainy and gusty morning. But the weather usually clears quickly after the front’s passage, although a wind shift is to be expected. And so it was, right after lunch, as soon as the front passes, more steady winds blow from the NW at about 24kn at the same time that the sky starts clearing up. Afternoon watches were kept busy on deck, gradually setting canvas to end up by diner time with all sails she could carry, full sail but the Fore Top Mast Staysail. First Top Gallants are clued down followed by the Royals, Outer Jib and the larger Desmond substitute Aap over the Main deck. After a while, with the sun setting through the clouds, Higher Staysails join the rest when the wind backed to W-ly and decreased to 18kn. As the Vlieger comes up there was the need for a short stitching repair, but soon it can come up again. On that new conditions and steering on Broad Reach-Full and by, our speed drop slightly to 6.5kn.

But it didn’t take long until the situation changed once more, and while the crew on watch was below decks busy with diner, one bell rang signalling the need of the ones on duty to report at the wheelhouse for sailhandling.

In a few minutes the wind had backed to WSW-ly gaining strength up to 28kn. From the Bow Sprit to the Poop Deck many hands are needed on a hectic hour of sailhandling. All Staysails are taken down, together with the Flying Jib, now with their wind shadowed by the Squares. Gaff Top sail comes down also, while the yards are squared to start running practically downwind.

From then on attention must be paid on the wheel. No staysails can be set counteract the rolling of the ship while she rides the 3m of swell with the wind on her back, and the larger waves easily quick her off her course. The steering becomes more difficult on that situation as the ship becomes less stable. The wheel must be kept on a narrow range of degrees, if we fall too much off course an accidental jibe can happen. Captain often advice the helmsmen to keep concentrated and in track, and even on one occasion he ran to the wheel avoid this precise situation.

After last days sailing on Close-Hauled, Beam Reach and Broad Reach points of sail, with the ship heeling over the lee side, now rolling on a dead wind run, it becomes more difficult to judge the real sea state or wind strength. But nevertheless Europa still keeps a good 7kn on her way to South Africa. At midday, and after having sailed 193nm in the last 24h, just 611nm separate our position from Cape Town. The goal is to reach the city in 5 more days. To accomplish that 5.1kn average speed should be maintained. For the moment doesn’t look difficult, but still there is a good stretch of ocean to cover, wind shifts and weather changes to face and strong oceanic current to be dealt with.

We're following your trip with interest. I know that the wind, the various weather situations, and the sails on your ship are of vital interest to you along with your speed along your route, but for persons such as myself who haven't experienced your vessel, things such as what foods and meals you are eating are of more interest. And it would be great to hear more about the topics your experts have chosen to speak about to your guests in their talks.

Following Jordi Plana Morales’ news about Bark Europa’s crossing from Ushuaia to Capetown with great interest, I am again and again impressed by the high art of sailing under such different conditions. I thank Jordi for his nearly dayly informations and wish the crew and passengers good winds and calm sea for the remaining miles to South Africa. Walter Schelble, Basel/Switzerland.