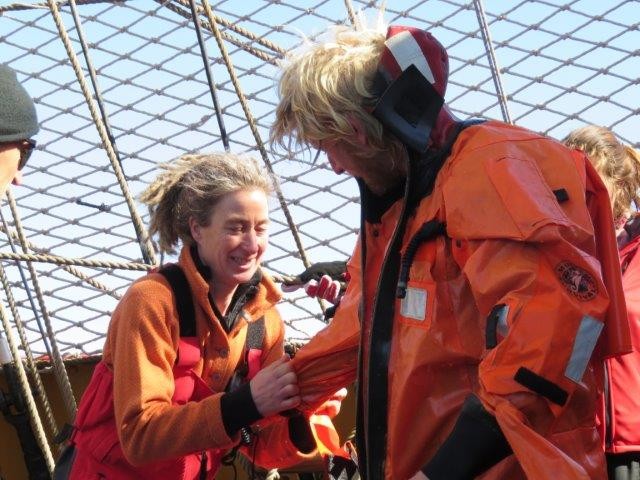 Our departure from Ushuaia was under blue skies and plenty of time to admire Tierra del Fuego,

Our departure from Ushuaia was under blue skies and plenty of time to admire Tierra del Fuego, as dolphins and albatrosses accompanied us through the Beagle channel. The dreaded Drake Passage has been very gentle. Winds of max force 6 from behind along with mainly sunshine, a full moon last night and the opportunity to helm using stars as a guide. So we are slowly making our way to Antarctica. We have already crossed the Antarctic convergence where Antarctic waters meet the sub-antarctic waters and there is a dramatic drop in temperature.

But the Drake is never without excitement. We were on lookout, admiring the view when we saw something orange in the far distance on the starboard side. Not knowing what it was we decided it best to report it to the bridge. A few minutes later, we heard the bell continuously ringing – I knew it was an alarm – but which one? Then “man overboard, man overboard” – Oh my God. But quickly followed by “this is a drill.” Thank goodness for that. The permanent crew quickly got the sails down, and we made our way to the object, coming to a textbook stop alongside. The sailors will appreciate the skill needed to accomplish this with a 60 metre ship. Two of the crew had donned dry suits and were quickly in the water – the 2 degree water and swam to pick up the buoy. We had our MOB on board quickly and in no time were setting sails again. Onwards to Antarctica.

Dear Helen, That was close! We have been watching your progress. Tell us all about it in Ireland! See you soon!!! Sincerely, Ciara + Jake

Lucky you! Greetings from the office!! Have fun!