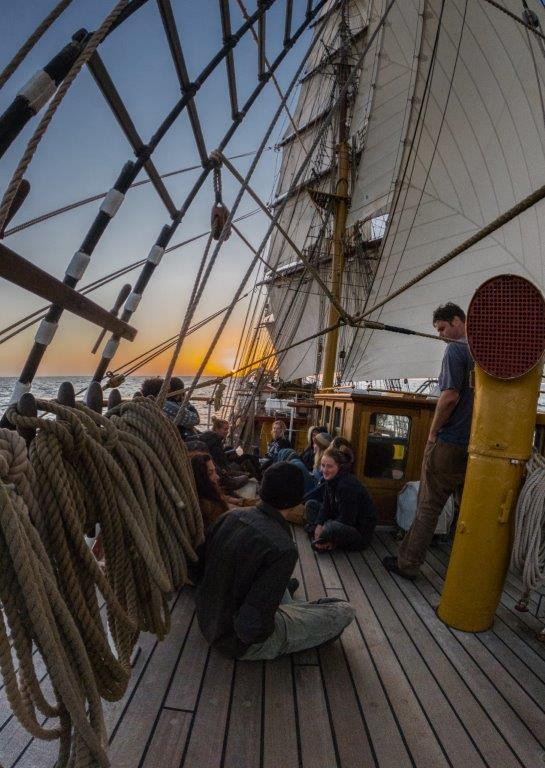 The day when we actually approach the South American lands, starts with setting all remaining canvas on abating winds and calming seas. The rough waters and gusts over 30kn now became a steadier 15kn breeze from a S by E direction. Europa sails westwards towards the continent braced sharp on Port Tack under clear skies.

First noticeable sign of the proximity of land as we sail into the large mouth of Rio de la Plata is the change in water colour, as the Oceanic blue waters become murkier. A quick look in the wheelhouse reveals that the sea bottom starts to show up in the depth meter. After weeks of sailing over the deep Ocean, leaving at our backs 4569nm, we are entering the South American Continental shelf, with just 160nm left to our destination port.

And while we sail in, a pod of Common dolphins join us, welcoming us to this Argentinean-Uruguayan waters. The taxonomy of the different species and sub species of Common dolphins is a good example of the never ending process of re-evaluation and revision, as they present several types, variants, sizes, shapes and colours. Despite the historic practice of considering their entire genus (Delphinus) into a single species, in the past few decades, over 20 distinct species of them have been proposed.

But in the 1960s after scientific research, it was concluded that there were just two of them, the short-beaked and the long-beaked. Being this latter one the species that could be found along the South American Atlantic shallow coastal waters. Trying to categorize their large amount of morphs and variants could be a tough cookie, and still the genetic research and the taxonomy of these beautiful and playful cetaceans is an ongoing project. They jump around and bowride the ship for about an hour, until the Europa sail into shallower waters.

By the afternoon, she even has to deal with sand banks just leaving less than 20 meters below her keel, resulting in an increase in the height of the swell. She rolls now, taking the 10kn of SSW-ly wind under full sail, doing a speed of 4 to 4.5kn.
As a precaution from waves breaking over the rails, portholes and watertight doors are closed to keep the water on deck.

Lookouts and wheelmen make their way outside through the bridge, and when taking their positions and having a look around, they are welcomed by several Black browed albatrosses flying around, this species capable of venturing more into waters closer to land than their larger relatives, the more oceanic Wanderers. A look at the sea surface it was worth too. Here and there, now and then a bird head pops up from the depths, few Magellanic penguins are spotted, while busy feeding during foraging trips from their colonies located a bit further South. A large turtle also shows up for a moment.

In the meantime, the wind has been easing down and the sun got lower in the horizon, in yet another great sunset, gifted once more with a smidge of Green flash as his last rays disappear below the horizon.

As the hours pass by, the wind dies down, and under an incredibly starry sky, Europa barely moves in the light airs and calm sea surface. Lights from the cities already can be seen glowing behind the horizon, and several tankers and cargo ships drift around or wait at anchor before heading to port or bunker oil from the numerous platforms in the area.