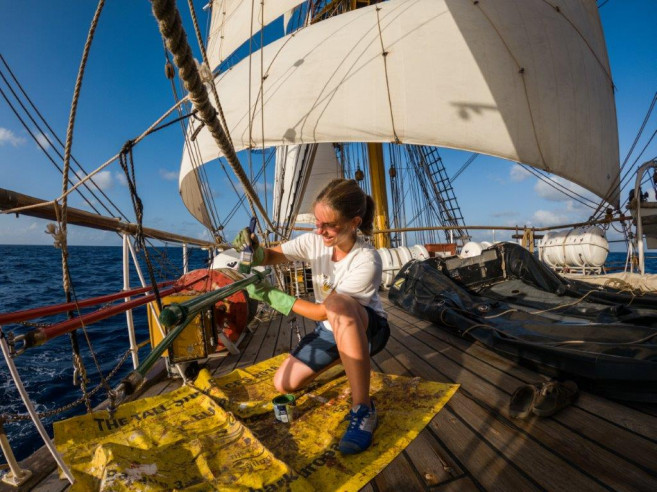 Bracing a bit back and forth sailing Beam reach on slightly shifting East by North, East by South winds has brought us 143nm further in the last 24 hours, counting a total of 2327nm since leaving Tenerife. The good wind and a current running also with us made for the good progress, and now we find ourselves just about 330nm from the city of Natal in the Brazilian shores. Running close to the coastline a counter-current would make for slowing down our way.

Even though our speed sometimes gets over the 7kn, the good weather and our location made for a good chance to take another sample with the Manta trawl for Regitze to check for plastics pollution. In order to do that, ship must run slower and from full canvas, some sails are taken down until Europa sails at a suitable trawling speed of about 4kn.

This scientific project aboard, quantitative and qualitative sampling of oceanic surface plastic pollution points to one of the greatest environmental challenges of our time. The global annual plastic production has increased with a 10-fold from the 1970s up until today. (330 million tons). More than 260 million tons of plastic ends up as waste annually; and 8-10 million tons of plastic waste ends up in the oceans. The EPA (United States Environmental Protection Agency) has stated that every piece of plastic ever produced still exists. Studies estimate that at this point in history, there are 15-51 trillion pieces of plastic present in the world’s oceans, from the nano to the macro scale.

This plastic afloat of any size, pose both physical and chemical threats to wildlife and the marine ecosystem, through entanglement, gastrointestinal blockage, reef destruction, bioaccumulation of the chemical ingredients of plastic or absorption of toxic chemicals.

Always further research is needed, and on that actual trip, Europa sails across the Atlantic Ocean gladly hosting this study.

Once the three required trawls are finished following a specific methodology, is time again for setting all canvas and regain the good sailing for the rest of the day and night.

In the meantime, making the top of the Mizzen mast its favourite perch and lookout point, a Red footed booby that has been with us already for a couple of days, keeps an eye on what we all do down below on decks and comes back and forth from quick fishing trips.

Under its attentive look, right underneath the steersmen hands on the wheel; at the opposite side of the ship, the bow lookouts enjoying the good weather; in between permanent and voyage crew alike now and then busy trimming sails and yards or involved on maintenance projects.

To the untrained observer it all would look like physical labour (pull ropes, climb, sand, hammer, etc), but actually all the small jobs to keep the good sailing, the good condition of the ship and properly running, require observation and thinking: slight wind variations make for Captain and Mate to react and adjust the sails and course accordingly; ropes to be changed, appliances to be painted, blocks to scrape, sand, varnish, seize and relocate; rubber boats to check, inflate and overhaul, all catching the eye of the experienced Bosun, knowing which, what and when to do.