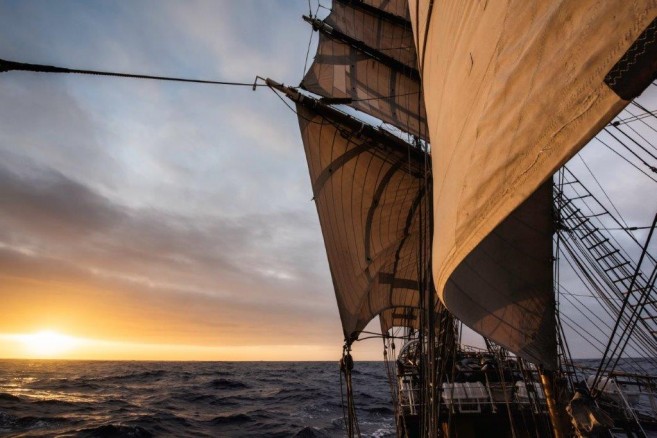 Dawn offered a short glimpse of the rising sun over the horizon, to quickly disappear behind the clouds that will cover the sky during
today’s journey, leaving behind a rainy day. After the strong blows experienced last night, in the early morning the wind decreased to a light W-ly breeze. By then, and with the help of many, we brace from close-hauled to bean reach and set the Outer Jib, Middle Staysails, Top Gallants. Not much later the Royals join the sail configuration. With the light breeze we roll over the long swell at just about 3.5kn. But the situation didn’t last very long, as soon gradually the wind increase. Following it as it rises and veer towards becoming N-ly, we steer on a course that will bring us to our first destination in Antarctica. By the afternoon the wind had increased to 23kn, blowing from the NNW as we sail on a 165º course at 7 to 7.5kn, with all Squares set, Lower Staisail, Spanker and all the head rig on a point of sail close to Beam Reach. Continuing with the preparations for our first landfalls in Antarctica, we also had to attend the mandatory briefing of the “International Association of Antarctic Tour Operators (IAATO)”. This membership association set up the rules and code of conduct for visitors ashore, to do safe and environmentally friendly touristic operations in Antarctica, in the frame of the Antarctic Treaty agreements. After all attending to this talk, we are ready for our first visit ashore. With our current speed under sail of about 7kn, and covering the last few miles left of the Drake Passage, it looks like tomorrow we will arrive to the South Shetland Islands, gate to the Antarctic continent. After the last few days braving the rough waters and seas of the Drake Passage, now at last Antarctica is at our reach. It might have seen difficult to reach, but we just have to bring back to our minds that Antarctica has been officially the last frontier in the planet to be revealed and studied. So never has been an easy job to get to it. In the past many perished or suffered great struggles to prove the existence of a south-polar continent, that was already predicted thousands of years ago by Greek philosophers in the 4th century B.C.
For us, those legendary lands would represent the first land we see and hopefully where we will set foot after sailing the Drake Passage,
following the path started by those early explorers and sealers. With the difference of enjoying the commodities of a ship equipped with the latest navigational systems, central heating, nice bunks, excellent food and possibilities of downloading wind forecast and ice charts, all aids to plan a safe sailing, the itinerary and landfalls. Like this, late at night we already plan to sail between Nelson and Robert Islands, though the so called Nelson Strait, that will open the relatively sheltered SE shores of the South Shetlands for us to visit.
Still laying at a distance of about 70nm by our daily meeting after dinner, sure by the early morning we will all catch sight of its rocky
coasts.