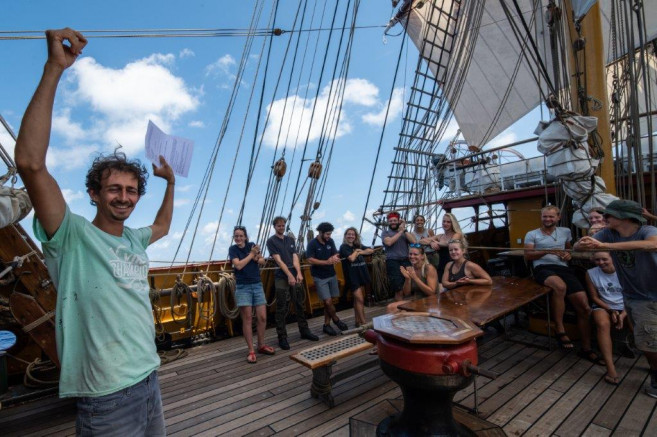 The sunrise lighting the sails welcome us to the new day, while the crew is doing the daily deck wash. Under the good winds, during the last couple of hours the Europa sailing speed under full canvas has been of a good 7.5 to 8.5kn.

In the meantime the E-ly wind is picking up. Braced close hauled on Port tack and heeling over to Starboard, some of the swell hitting the ship on her Port side starts splashing the decks and right at change of the morning watch, Captain and Mate decide to reduce sail. Flying Jib is taken down and furled, and up aloft the Skysails are clewed up and stowed away as well.

Along the morning the fair strong wind eases down gradually, backing a bit to more NE-ly, time for setting again the sails that were taken down earlier. Anyway the forecast indicates the wind to slightly veer and increase later on in the afternoon.

174nm of good sailing had been done in the last day, giving us a total of 2668nm from Canary Islands to our midday position, just 250nm from the city of Aracaju on the Brazilian coast. From here 1935nm are ahead of us until reaching our next port of destination in Montevideo.

And while enjoying a fantastic sailing on those offshore waters from the South American coast, today a pod of stumpy acrobatic dolphins joined us for about an hour.

About 30 to 50 of them could be seen far away jumping and speeding up on our Starboard-aft, trying to catch up with us. Not difficult for those masters of the oceans and the speed, so in no time a whole bunch of them were already bow-riding the Europa. A close look at them revealed some differences from other more common species, and a good look at the marine mammal guide gave us an idea about what species they were. Even though related to the Spinner dolphins, it look like those ones there were a group of the rare Clymene dolphins, with characteristic dark dorsal cape, light grey sides, white belly and black tips of their short beak. Lucky enough for us, as the Clymene were just confirmed as a species only in 1981, and still remains one of the least known cetaceans.

But the excitement for the journey was just beginning. After lunch, was about to take place the most expected and announced Europa Pin-rail Chase. Quite a traditional activity to perform in sail training ships, from working ones to pleasure Tall Ships. New boarding crew must learn quickly their lines, of which ships like ours is in no shortage. At first sight for the inexperienced eye, coming on board is like making way through a spiderweb of ropes, seemingly impossible to learn their functions. But bit by bit, setting and dousing sails and with the help of the experienced permanent crew, their talks, hands-on exercises and instructions, we all learn that there is actually a system, an order on them and their position on the different attachment points over the different decks.

And thus afternoon was the time for checking our knowledge. Expected to be a serious race-competition between the different watches, it turned out that the permanent crew had came up with a funny activity for all to enjoy in a festivity atmosphere.

Captain takes the wheel, Mate keeps a good overlook from the wheelhouse, Bosun supervise the activity that herself came up with out of her experiences from similar trips, and an “appalling” permanent crew member Cri acts as master of ceremony, explaining the games and keeping the scores.

Red, Blue and White watches gather on deck for the competition, but also the permanent crew joins with their own team… but soon they realise that is not going to be so easy to beat the trained voyage crew…