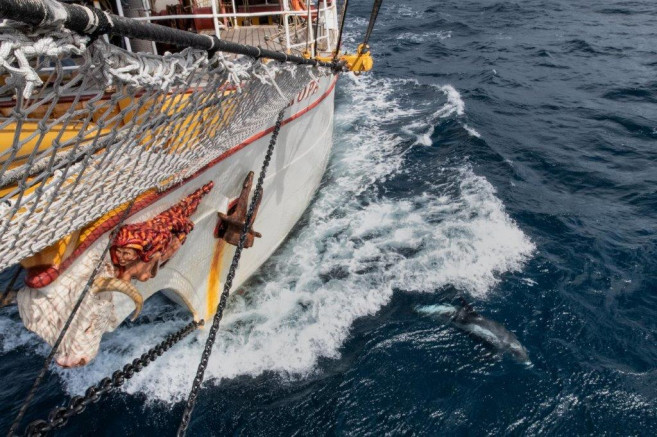 During the whole day, the fair winds blowing from the NW by N, backing and veering back and forward to NW-ly, pull us on a good SSW course at 6.5 to 8 kn of speed.
Averaging 17 to 18kn, the strong steady breeze picked up and shifted a couple of times when showers catch up with us. Not knowing exactly what to expect when suddenly the sky darkens and a few raindrops fall on deck, the sailhandling for the day was more related with preventing being caught in the squalls with too much canvas set. Like that, menacing weather during lunchtime, made for clewing up Skysails, together with dowsing Vlieger, Main Royal Staysail and Flying Jib.

The Uppermost squares were set back up again in the afternoon, just to be stowed away a bit later once more in similar weather conditions than before. All an all having a great day of sailing while gradually the Europa eats away mile after mile on her way home. By the afternoon change of watch, just 250nm were left in straight line to arrive to port again. But until then, the good old ship is home. No matter the bit of rolling and pitching, the splashes of the waves on deck or the rainfall during the time steering, she is our shelter and the only thing between us and the North Sea waters, our refuge from shifting winds and passing squalls. But for swift return, care must be taken at the wheel to maintain a good course and keep the wind filling up our sails, and a sharp lookout is needed to spot the numerous buoys, oil rigs and vessels that sail around loaded with goods, fish, gas or oil.

As we sail along, White beaked dolphins join us for a while, taking the waves we make with our bow as we cut though the waters, and heaps of seabirds pay us a visit. They seem to rejoice on the disturbance we make on the wind-field as we sail by, and why not, try their luck for the chance of a morsel in case we would throw food scraps overboard. Used as they are to the fishing fleet operating in the area, they normally follow the ships in expectation, not being lucky with us as we are not fishing and furthermore, we keep all our garbage on board. But in operating fishing fleet, fish escape from their nets and usually by-catch is thrown overboard, as well as leftovers from the larger ships that have fish processing facilities on board.
Seagulls fly around and occasionally Gannets pay us a visit.

A bit more rare was the sight of a Great skua, the largest and most powerful of the northern skuas. They use the Faroes, Iceland, Shetlands and Orkneys as main breeding grounds, occasionally in mainland Scotland too and a reduced number choose to nest all the way up north in Spitsbergen. Sure they keep an eye to the Guillemots swimming with their youngsters, the latter distinguished by their lighter colour pattern and smaller size. They actually jump off the cliffs where they hatched 18 to 25 days before, still incapable of flying and with just a third of the size of their parents, finishing their growing while swimming in the water. Increasing numbers of Northern fulmars kept gradually gliding towards us and flew round and round just above our heads, in their silent, ghost-like flight to and fro over the surface of the water and around the ship over the gloomy sky in the background.