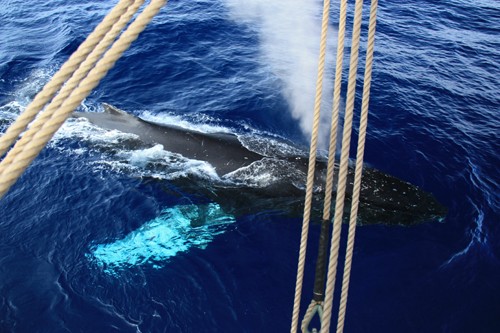 During the early morning we enter the Gerlache Strait, leaving behind the Bransfield. Since our landfalls in Deception we sailed away from South Shetland Islands and now, in the moving along the West Coast of Antarctic Peninsula we move along a vast, glaciated, mountainous and frozen landscape. Like everything in Antarctica, it was worth the wake-up early and walk on deck, just be welcomed by several Humpback whales. Many of them have been spotted during the night, and the sights kept going through the day, as we sail on one of their main feeding areas in the Western Antarctic Peninsula. We spend some time whale watching, as the whales feed and dive showing their flukes, and even a couple of them breach in the distance. Countless photographs were already taken even before breakfast time! Slowly we make progress towards the entrance of the Graham Passage, a narrow channel that separates Murray Island from the W coast of Graham Land. Captain Skidsmo named it after his whale catcher Graham, which was the first to pass through it, on March 20, 1922. Without much difficulty we can make our way through the channel, surrounded by glacier fronts, luckily for us in flat sea conditions and calm winds.

After getting off the channel, several more Humpback whales are spotted as we motor towards our next destination, Foyn Harbour at Enterprise Island. This 1.5 miles long island lies at the NE end of Nansen Island in Wilhelmina Bay. The area was first charted as one feature and named "Ile Nansen" by the Belgium Antarctic Expedition under Gerlache in 1898. The islands became well known to whalers operating in the area in the early 1900s and the names North and South Nansen Islands were used to distinguish between them. Since Nansen Island has now become established for the larger feature, a new name has been given to the smaller, commemorating the enterprise of the whalers who made anchorage at its S side (Foyn Harbour). It became a major centre of summer industry during the period 1916-30. The highlight of the area was the visit to the small cove named Gouvernøren Harbour, indenting the E side of Enterprise Island. The
Gouvernøren was a factory ship operating in these waters until she burnt here in 1916 with a payload of 16,000 barrels of whale oil. She was intentionally wrecked there in 1916 as a consequence of the fire, the crew was picked up by other whaling vessels, part of the cargo was also saved, but the ship was lost, and lies there since then.

Eric skilfully manoeuvred the ship through ice floes, icebergs, rocks and shallows, till reaching the small cove where the shipwreck is located and even positioned the Europa alongside without touching it. The protected cove is a place usually used by small yachts to look for shelter or a quiet place where to spend the night, and indeed two sailing yachts were there this morning, launching zodiacs and operating
with their passengers in the area. The setup is quite unique, a small cove surrounded by glacier fronts, and there she is, with her bow sticking out of the water, and sloping down to 20 m deep.

From this spectacular spot with the shipwreck, we motored through Wilhelmina Bay, heading for Orne Harbour, our next destination. The calm waters and light breeze offered perfect weather conditions to continue with our whale watching, and by lunch time several more Humpbacks were spotted, and we decide to slow down and slowly drift close to them. We could enjoy again a couple more of close encounters with them as they dive, feed and splash the water with their fins which together with breaching, are behaviours that are not completely clear for us to
understand. There are several ideas about it, from getting rid of parasites, to some sort of communication or also related with feeding practices.

Around 16:00h we were entering Orne Harbour, and despite the strong wind soon we were all ready for leaving our footprints at the Antarctic Continent itself for the first time this trip!
Orne Harbour is a Cove 1 mi wide, indenting the W coast of Graham Land 2 mi SW of Cape Anna. It was discovered by the Belgium Antarctic Expedition under Gerlache in 1898. The name Orne Harbour was probably in use by Norwegian whalers, because the Scottish geologist David Ferguson following his geologic reconnaissance of this area aboard the whaler Hanka in 1913 already used it. The conspicuous Spigot Peak frames the entrance to the cove on its South-western side. This 285 m cliff was just relatively recently shown on a chart, by the Argentine government
in 1950. The name, given by the UK-APC in 1956, is descriptive of the appearance of the feature; like a wooden peg. We landed just beneath the peak... and after a steep hike up the snow slopes following the pre-existing tracks, we reach the rocky ridge on top. The views from the top are breathtaking, over the Gerlache Strait, Rongé Island, our next destination Cuverville Island and the Errera Channel. The rocky outcrops are home for a relatively small colony of Chinstrap penguins. After enjoying this magnificent spot for a while, we made our way down the hill to be picked up by the zodiacs and embark the Europa.

After a short ride in improving wind conditions we reach Cuverville Island. The island was discovered by Gerlache’s Belgian Antarctic expedition (1897-99), and named by Charcot for a vice-admiral in the French Navy. Nearly vertical cliffs surround the island except on the NE coast, where a gently sloping apron of bedrock extends 200 meters from the shore to the base of the cliffs. Large, bare rock areas of this platform provide nesting sites for one of the largest rookeries of Gentoo penguins. As we know now, these species prefer nesting on smaller colonies than
other species. But here several thousand of them find their place for breeding. After walking around the lower slopes around the nesting sites, we could also enjoy some after-dinner exercise. Some of us hiked all the way to the top of the snow-covered island for an exceptional view of the area.

Several big chicks can already be seen, while their parents are busy feeding them and steeling rocks from each other nests. At 22:00h last zodiac is leaving the island. Back on board we prepare everything to spend the night adrift in the area. But about half an hour from our return, suddenly the wind picks up from almost calm conditions to about 40 knots! And Captain decides to drive towards the more open and less iceberg filled waters of the Gerlache Strait. Its amazing how the weather conditions can change here in a blink of an eye!