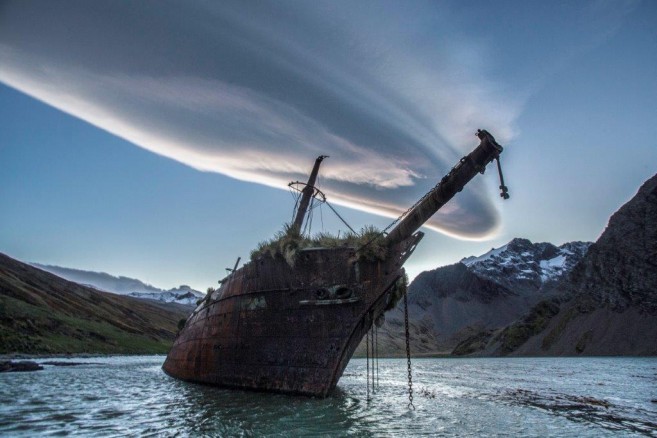 On 26 March Europa’s barograph recorded a steep drop in air pressure. A strong depression approaching was forecasted to pass straight over our heads, and indeed the pressure dropped from around 990 hPa to about 960 hPa in 12 hours. This resulted as expected in strong winds of up to 50 knots which started blowing over the South Georgia mountains and were forced to move up to pass over the mountains and then move down again. The clouds in the air show how the forceful winds are with spectacular patterns over Grytviken and Europa anchored safely hiding behind the Paget mountain range.

Using the favourable winds we sailed from Grytviken to Ocean Harbour to cruise to the Bayard wreckage and make a short landing at the beach. Meanwhile the strong winds prevailed at higher altitudes and treated us to a display lenticular clouds, spectacularly lit by the setting sun.

Lenticular clouds are created by winds that are forced over the mountains at and once a steady state is reached, a wave pattern becomes visible in the sky. The lenticular clouds are formed where the air rises and condenses and disappear where the air sinks again. Since the motion is related to the mountains, the clouds stay in one place and are not moving with the wind. The colours of the sunset illuminating the clouds create a surreal spectacle.

What a beautiful photo