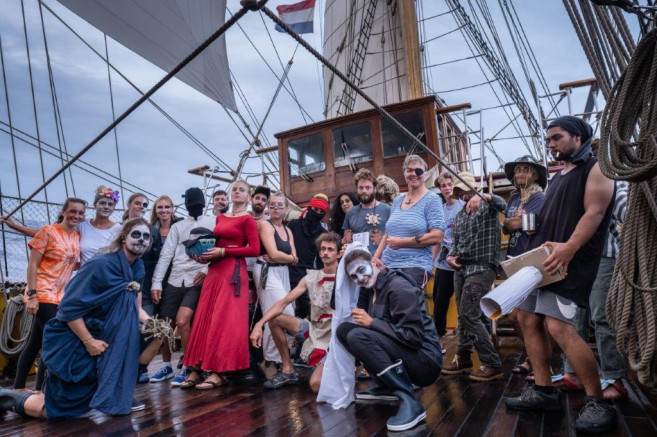 One of the longer lasting refurbishing projects during the last year between shipyards and maintenance in different Dutch Ports, the reconditioning of the ship’s stores hold, looking as nice as it can be in a steady ship, today started to show what appear to be slight design problems. While Europa pitches and heels over the swells, juices and cans slide forward over the ample shelfs against the fiddle-sticks, threatening to shatter them and fall, asking at least for a temporary solution. Using crates to store them on their racks seem to work for the moment.

In the next hold, the water-maker have a spell of capricious behaviour. In the galley a hot water hose bursts. In this Halloween day, maybe it all has something to do with the Klabautermann, the water mythological supernatural entity who assists sailors in their duties, but eventually also shows some more sinister attributes making things go wrong in the ships.

Who knows, today perhaps he is playing pranks with us. Not to be set eyes upon by any person onboard, under the penalty of dooming the ship, smoking tobacco pipe and wearing sailor clothing, he roams around decks and corridors. Cheerful and diligent creature he possess an expert seamanship understanding. Now and then his rumbling noises can be heard, growling voice and mischievous behaviour, but in other occasions is also known for helping in the wellness of the ship or even rescuing sailors washed overboard. Night of witches, werewolves, vampires.

Sure Klabautermann doesn’t wander around the ship on his own in Halloween. By dinnertime other entities of the darkness started to show up. First queuing up for a meal in the galley, then taking over lookouts and steering before gathering in Europa’s Bar for a drink. Playing pranks, divination games, partying, telling scary stories, all activities related with such a day like today. Christian tradition also relates this day with church services, reflection, recalling of the loved ones that had passed away and other intricacies of their faith including abstain from eating meat.

All those rites, scary customs and festivities are thought to have been influenced by the Celtic ancient pagan festival to commemorate the end of the harvest season and the beginning of winter or the 'darker half' of the year. Darkerhalf of the year in the northern hemisphere, the opposite for us, sailing South into Spring and Summer.

Fortunately our creatures of the night sailing on board this evening seem to just pursue intentions to show off and have their deserved ‘once in a year’ fun, rather than mess around with the actual sailing. If the sailing was good during the day, the evening and night just made for an improvement. Braced Beam reach and later on a couple of points squarer, moderate sea state and over 20kn of Easterly goodwinds, pull us between at 8 to 9kn of speed, and actually after the last 24 hours we are 180nm closer to Montevideo. Great progress that luckily will last for another day or two if we are to trust the weather forecast.

Sunny, overcast or rainy doesn’t matter much for the fair winds to fill up the Europa’s sails set: squares up to the Royals, Lower and Middle Staysails, Inner and Outer Jibs, Mizzen and Gaff Topsail, the latter for a while until increasing wind was making for a difficult steering. But other projects such painting portholes, sanding and varnishing on deck depend on dry climate. Lucky for today, unknown for tomorrow to continue with further layers or finer sanding paper. Anyway, it was good enough in the morning to finish the preparation of library portholes, protect them with a first layer of primer and to start varnishing our good old deck benches.

Thanks a bunch for all of your fine writing & keeping us up to date in the logbook! Enjoy Port!